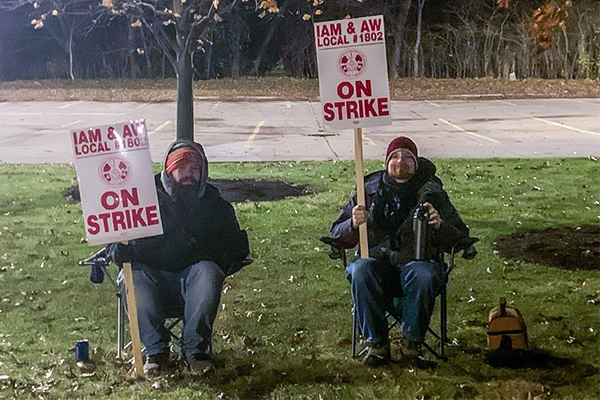 AMHERST, Ohio, Nov. 14, 2022 – Approximately 133 members of the International Association of Machinists and Aerospace Workers’ (IAM) Local 1802 (District 54) are on strike at Nordson Corp. in Amherst, Ohio after overwhelmingly voting to reject the company’s “last, best and final” contract offer. The strike began at midnight on Monday, Nov. 14.

IAM Local 1802 members are demanding a contract that instills respect and dignity in the workplace. The company’s “last, best and final” contract offer, which was soundly rejected by IAM Local 1802 members, included the continued practice of mandatory overtime and that members work a maximum of 32 Saturdays per year, with Sundays as an option.

“IAM members at Nordson put themselves and their families at risk during a pandemic to ensure their critical jobs were done and that this company remained successful,” said IAM District 54 President and Directing Business Representative T. Dean Wright, Jr. “Now, we’re simply asking for a respectable contract that has a basic level of work-life balance for our members. We are a critical part of this community and its economy and we’re grateful for all the support of these dedicated workers taking a stand for themselves and their families.”

IAM members at the Nordson Corp. manufacture products used for dispensing adhesives, coatings, sealing and more for end products that include packaging, electronics and medical equipment.

“The entire Machinists Union stands in solidarity with IAM Local 1802 members at Nordson,” said IAM Eastern Territory General Vice President David Sullivan. “We are deploying all resources necessary to ensure they get the contract they deserve and continue their essential work for this company after this matter is resolved.”