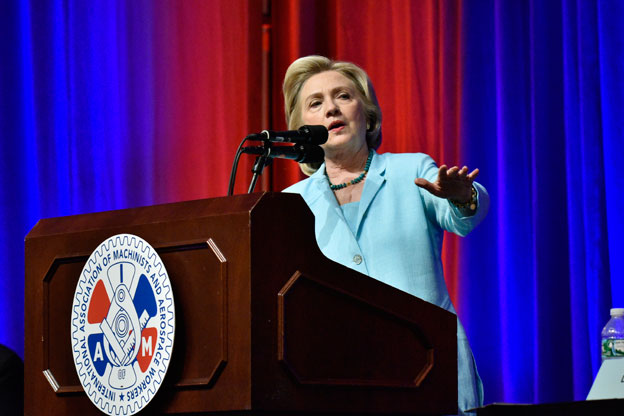 The IAM has endorsed presidential primary candidate Hillary Clinton, joining the American Federation of Teachers, the Roofers and Waterproofers Union, the Bricklayers Union and the Plumbers and Pipefitters Union. (Photo: Bill Burke, Page One)

In a move that illustrates the IAM’s endorsement of Hillary Clinton, the presidential candidate voiced her opposition to the implementation of a part of the Affordable Care Act (ACA) that would substantially increase health insurance costs for many IAM members and other Americans.

“I encourage Congress to repeal the so-called Cadillac Tax,” said Clinton. “My proposed reforms to our health care system would more than cover the cost of repealing the Cadillac Tax, while also reining in skyrocketing prescription drug costs and out-of-pocket expenses for hard-working families.”

Scheduled to go into effect in 2018, the 40 percent excise tax would be imposed upon many of the employer-provided insurance plans IAM members have negotiated into their contracts. The tax affects plans in which coverage costs exceed $10,200 for individuals and $27,500 for families.

“We urge Congress not to miss this opportunity to address a serious problem that will detrimentally affect working families across the country,” said IAM International President Tom Buffenbarger.

TAKE ACTION: Contact your members of Congress and tell them you support the repeal of the Excise Tax by calling (202) 224-3121.