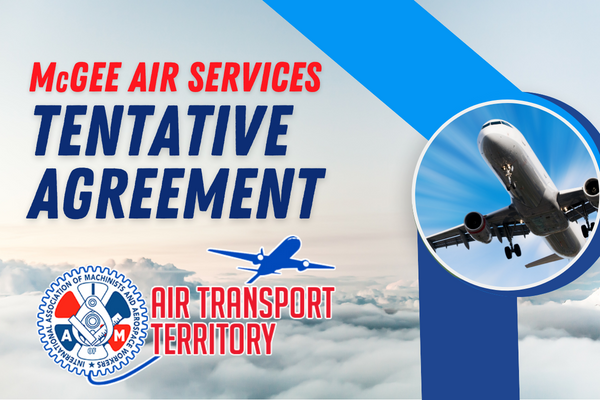 WASHINGTON, Dec. 21, 2022 –The International Association of Machinists and Aerospace Workers (IAM) has reached a two-year tentative agreement extension with McGee Air Services, an Alaska Airlines subsidiary, that will put over 2300 IAM members at McGee Air Services workers at one of the highest pay scale levels for airline operation vendors in the industry.

If ratified by IAM members at McGee Air Services, the two-year extension would:

Read the complete highlights of the tentative agreement here.

“The IAM’s tentative agreement was long overdue for our members who give so much to carry out the mission of McGee Air Services,” said IAM Air Transport Territory General Vice President Richie Johnsen. “This agreement came about after meeting and listening to our member’s concerns during station visits this year. IAM members’ ramp service work is vital in making Alaska Airlines one of the top-performing airlines.”

“Excellent way to close out the year by presenting an agreement extension called for by the membership,” said IAM District 142 President and Directing General Chair John Coveny. “Once again, our IAM leadership provided the necessary resources to help obtain a tentative agreement that will impact other companies similar to McGee Air Services. I appreciate the dedication of our IAM negotiating committee and the entire support staff for their work in getting improved wages and benefits. The next steps include meeting with the members to answer any questions about this agreement extension.”