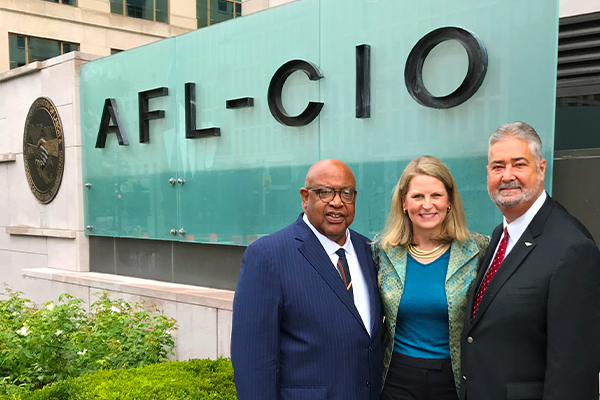 As the IAM, the labor movement and working people around the globe continue to mourn the untimely passing of Richard Trumka, the Machinists Union looks forward to working with the most diverse leadership team in the history of the AFL-CIO.

The @MachinistsUnion is proud to welcome @LizShuler as president and @STRedmond as secretary-treasurer of the @AFLCIO. Together with @Tefere_Gebre, this is the most diverse leadership team in the federation’s history.

Let’s grow our movement and unite our fight for all workers.

On Friday, August 20, the AFL-CIO Executive Council elected Liz Shuler as the first woman to hold the office in the history of the labor federation. Shuler, an IBEW member, had served as AFL-CIO secretary-treasurer since 2009, where she was the federation’s chief financial officer and placed an emphasis on grassroots organizing and youth engagement.

“I am humbled, honored and ready to guide this federation forward,” said Shuler. “I believe in my bones the labor movement is the single greatest organized force for progress. This is a moment for us to lead societal transformations—to leverage our power to bring women and people of color from the margins to the center—at work, in our unions and in our economy, and to be the center of gravity for incubating new ideas that will unleash unprecedented union growth.”

The Executive Council also elected United Steelworkers International Vice President Fred Redmond to succeed Shuler as secretary-treasurer, the first African American to hold the No. 2 office. At the USW, Redmond oversaw the Civil and Human Rights Department, as well as the union’s shipbuilding, health care and public sector bargaining, and worked with USW allies across the country in responding to attacks on voting rights and in combating economic inequality.

“I could not be more excited to get to work with President Shuler so we can build on the labor movement’s legacy of change, writing a new chapter that brings the promise of union membership to workers across this country,” said Redmond. “This is the right team at the right time to help bring about the economic and social justice America is hungry for.”

Tefere Gebre will continue as executive vice president, rounding out the most diverse team of officers ever to lead the AFL-CIO.

The AFL-CIO is a federation of 56 unions and 12.5 million members across the United States, including the IAM.