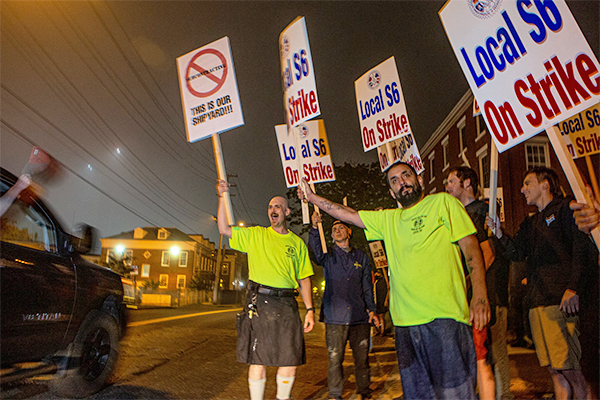 More than 4,300 IAM Local S6 shipbuilders in Bath, ME are on strike to stop the company’s continued attempts to outsource work to out-of-state contractors. The proposed contract, which also attacks seniority rights at the shipyard, was voted down by more than 87 percent of the membership.

“Despite our repeated warnings to the management of Bath Iron Works, this employer has continued to take taxpayer dollars and outsource good Maine jobs to out-of-state contractors,” said IAM International President Robert Martinez Jr. “The company is engaged in flat-out union-busting, and is exploiting the current pandemic to outsource work from its dedicated employees, who are risking their health to build ships that protect our national security.”

Read the full statement of support from Martinez.

Bath Iron Works, a subsidiary of General Dynamics, has refused to put aside its misguided proposals to subcontract work without workforce shortages at the shipyard, despite the IAM presenting numerous viable solutions to meet the needs of the company and the U.S. Navy.

“BIW President Dirk Lesko and company management are solely responsible for this strike,” said IAM Eastern Territory General Vice President Jimmy Conigliaro Sr. “They bet that newly hired and mostly first-time union members would believe the lies and support BIW over their new Brothers and Sisters of IAM Local S6. This was a fool’s bet, as the entire membership is unified and fighting for a contract they all deserve. That is why I’ve committed the territory staff, and all of our resources to support the working families of Local S6 and the communities they live and work in.”

Local S6 President Chris Wiers said he is proud of the membership for standing up for good jobs in Maine.

“We are proud to build the best ships in the world and we want to keep it that way,” said Wiers. “We want jobs at the shipyard to be high quality jobs that members can earn a decent living in over a long career.”

IAM Local S6 members proudly build U.S. Naval ships that engage in a wide variety of combat and peacekeeping missions. During the COVID-19 pandemic, members have risked the health and safety of themselves and their families to continue production for BIW.