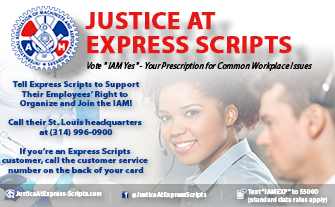 A St. Louis-based pharmaceutical company is biting the hands that feed them by claiming to support unions, taking in billions of dollars a year from union members, but then denying their own workers the right to organize and bargain collectively.

Call 314-996-0900, or the number on the back of your Express Scripts card and tell them: “If you support labor, then support your employees’ right to organize and join the IAM!”

Express Scripts manages more than a billion prescriptions each year for millions of Americans – including over 5 million union members at over 400 union health and welfare funds.

The pharmacy benefit management company manages prescriptions for IAM members at Boeing and for TCU, as well.

They even boast online about their so-called “union commitment” and how their corporate headquarters, a 315,000 square-foot building in St. Louis, was built entirely by organized labor.

Help us flood their phone lines!

If you are an Express Scripts customer and have a card, call the customer service number on the back.

Let’s remind them of their so-called “commitment to labor.”

Tell them “If you support labor, then support your employees’ right to organize and join the IAM!”

“The bottom line is this company has been funded on the backs of union members,” District 837 Directing Business Representative Steve McDerman said recently at the Missouri AFL-CIO Convention in Kansas City. “Many of us in this room – at some point or another – have had to turn to them when we or a loved one has gotten sick or are in need of a maintenance drug. The time is long overdue to bring justice to these workers. No more will we sit idly by and watch another multi-billion dollar company stomp on their workers’ right to unionize. If Express Scripts wants a fight, the IAM is happy to oblige them!”

Since the filing, Express Scripts has hired one of the most notorious union-busting firms, Jackson Lewis, which specializes in “comprehensive preventive labor relations.” And they have delayed the union election until Friday, October 14 and Tuesday, October 18, 2016 in an attempt to gain more time to persuade workers to vote against joining the union.

“These workers have been through the ringer and back with this company year after year over unfair overtime rules, the company’s paid time off and attendance policies, low wages and overall respect on the job,” said District 837 Business Representative/Lead Organizer Mike Lloyd. “They’re sick and tired.”

Express Scripts has been voted the second worst company to work for in the U.S. every year for the last four years – topping the list in 2015.

“Express Scripts can’t have it both ways,” said IAM Midwest Territory General Vice President Philip J. Gruber. “We will not allow them to take money from labor union members with one hand, and then disrespect them with the next. Their workers have a right to justice and fairness on the job. They have a right to vote ‘IAM Yes.’”

Call 314-996-0900 or the number on the back of your Express Scripts card and tell them: “If you support labor, then support your employees’ right to organize and join the IAM!”