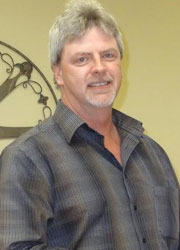 Martin joined IAM Local 863 in January 1990 while working at Ball Packaging Products in Burlington, Ontario, just west of Toronto. He immediately became involved with his union being elected Shop Steward that same year. He subsequently held various positions within the local including negotiating committee member, plant committee chairperson, and health and safety representative. Martin was elected Local 863 President in January 1996 and continued to hold that position until 2008 when Ball Packaging closed its Burlington plant. Martin was instrumental in forming a job action center, which ultimately found employment for every member employed at that plant. He was elected Business Representative for District 78 in Toronto in 2010, and in April 2013 Martin became Directing Business Representative of District 78, a position he held until his recent promotion.