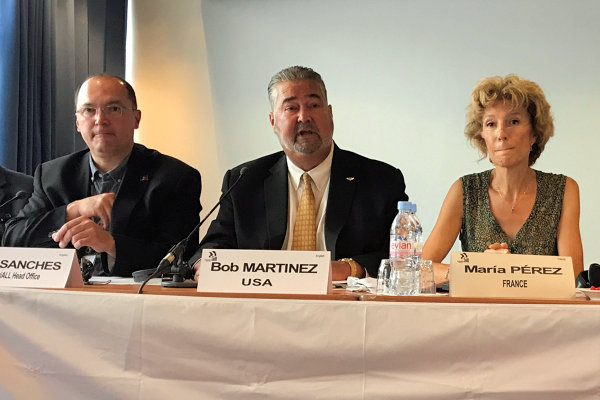 IAM leadership from the U.S. and Canada are meeting with union representatives from 10 other countries—Japan, the UK, Italy, India, Sweden, Spain, Germany, France, Belgium and Morocco—to build union power in the growing global aerospace industry.

Aerospace unions in Paris this week are assembling as affiliates of IndustriALL, a 50-million-member global union federation that works to organize and raise the standard of living for working people all over the world.

Solidarity is especially critical in the aerospace industry, said Martinez. Multinational corporations pit industry workers against each other, using the excuse of international competition to drive down wages.

“Let us never forget, we all represent aerospace workers,” said Martinez. “We all have the same desire for better wages and benefits, health care, retirement and job security.”

Companies like Boeing have continuously shipped IAM jobs with good pay and benefits to China, where working people have few rights. The company recently broke ground on a 737 finishing center in Zhoushan, China.

“When a company would rather create aerospace jobs in China—instead of at home, it’s time to take solidarity to a new level,” said Martinez.

IAM Canadian General Vice President Stan Pickthall has seen the same corporate behavior, which he said is “moving work to low-wage countries in order to increase profits at the expense of workers globally.”

Aerospace unions must have solidarity on a global scale, said Martinez. That means sharing information, coordinating on organizing and trade policy, and demanding companies respect commitments made under global framework agreements.