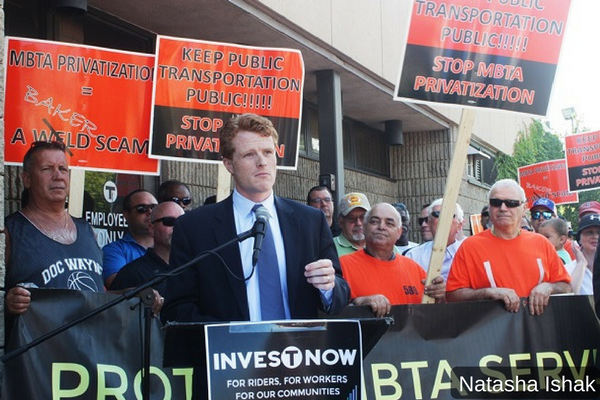 IAM Local 264 Bus Mechanics and a coalition of public transit riders and community supporters are ramping up their campaign against the outsourcing of bus maintenance garages.

More than 100 people gathered outside a bus maintenance facility in Quincy, MA.

“All of Massachusetts will be watching to see whether the governor accepts our $29 million offered in savings, or whether he rips apart the lives and jobs of these hard working mechanics, their children and their families,” said Mike Vartabedian, an IAM District 15 Business Representative.

U.S. Rep. Joe Kennedy III spoke in support of the fight to save the jobs of Local 264 mechanics, fuelers and technicians.

“The men and women that are here today are just asking to negotiate. They’re not asking for much,” Kennedy told workers and their supporters outside the garage. “They’ve put their own proposals for saving on the table and are asking for a chance to engage across a table to see how we can come to an agreement.”

I am appalled by @MassGovernor‘s ill-conceived attack on public transit. We have your back, @IAM264Boston. #1u https://t.co/cVCrnWt3GQ

Want to show that you have the back of hardworking IAM Local 264 Bus Mechanics?