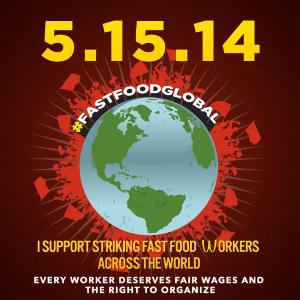 Today, fast food workers around the world engaged in a one-day strike for higher wages and the right to join a union.

The events – which are a part of the growing “Fight for Fifteen” movement – took place on May 15 as a symbol of the $15 minimum wage U.S. workers deserve to be paid.

Actions took place in more than 150 cities around the United States and in 30 other countries. Thousands of workers participated.

The strikes are part of a growing trend where workers are refusing to sit by while their increasing productivity leads to greater corporate profits, but has little effect on stagnant or declining wages and benefits.

“We’ve gone global,” said Ashley Cathey, a McDonald’s worker from Memphis, TN, who makes $7.75 an hour after six years on the job. “Our fight has inspired workers around the world to come together.”

Many of the international actions were focused on McDonald’s, a worldwide leader in low-wage jobs.

Activists held a teach-in outside McDonald’s head office in Auckland, New Zealand; staged flash mobs at five McDonald’s locations in the Philippines; and shut down a major McDonald’s during lunchtime in Belgium. The events around the world were led by the International Union of Food, Agricultural, Hotel, Restaurant, Catering, Tobacco and Allied Workers’ Associations.

“Working families everywhere are inspired by the spirit and the courage of fast food workers who are striking today in over 150 cities,” said AFL-CIO President Richard Trumka. “Every worker deserves fair wages and the right to form a union without retaliation because no one who works full-time should struggle to support their family. That’s why the ‘Fight for Fifteen’ movement is growing bigger and protests are happening across America and six different continents. The message is clear: corporations should pay their employees fair wages and Congress should act so no one gets left behind. Only then will we have an economy that works for all working people.”