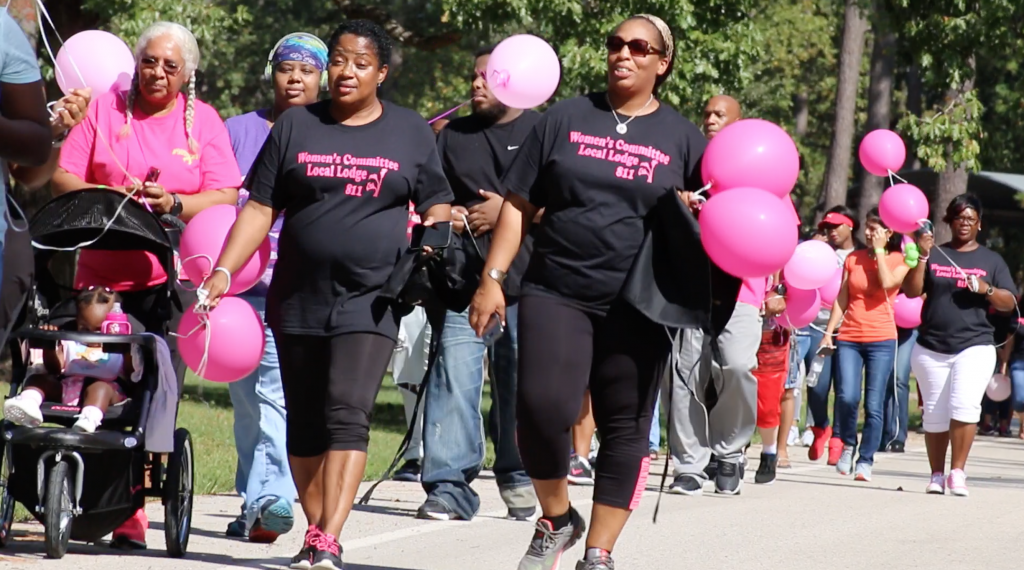 This past Saturday morning in Houston, Local Lodge 811 Women’s Committee held their 3rd annual Memorial Cancer Walk. The goal of the event was to raise awareness for those impacted by cancer – caregivers, families and patients alike.

The walk was part of Houston’s annual IAM Union Picnic.

“The first year we did it we had maybe 15 people,” said project organizer and Local Lodge 811 Secretary Treasurer Sarah Monderoy. “We’ve learned a lot since then, about how to plan dates, locations and times that work for more members,” she added, jokingly. “Since we started, we’ve built a much stronger turnout, and we are very proud of that.”

Among the activists participating in the event were cancer survivors, families of survivors, and those who were walking in honor of others who have passed away.

The project began three years ago, led by Local Lodge 811 Women’s Committee Chairwoman, Jackie Golphin. Jackie is a cancer survivor who wanted to find a way to encourage women like herself to get early screenings.

Jackie approached United Airlines managers at IAH in Houston about including public service announcements to promote cancer screenings as a regular part of the company’s health and wellness messaging. Hub Manager Becky Alberts was willing to partner with the Women’s Committee – and Breast Cancer awareness became a top priority at the Houston airport.

Today, thanks to the activism of Local Lodge 811 Women’s Committee, travelers that pass through Houston’s international airport will see pushbacks, baggage carts, tugs and other heavy equipment painted bright pink.

“Everyone was wearing pink last year,” Sarah joked. “The momentum that we gained from that work was incredible, and we used it to start the Memorial Cancer Walk.”

To date, the Memorial Cancer Walk has helped drive the message that early screenings save lives to an audience of several thousand IAM Union members in Houston, including Locals 811 and 2198.

“We try to remember that caregivers and families are impacted by cancer, too. And we also work to remind people that we don’t just care about breast cancer,” Sarah said. “All cancer patients go through many of the same struggles with chemotherapy, surgery, and financial hardships. Cancer is cancer, and we want to support everyone that has to deal with this disease.”

Local Lodge 811 Women’s Committee hopes to grow the program so that it can reach more people, and inspire more women to become activists in their communities.

“Activism is one of the key roles of union members,” Sarah said. “And, activism comes in many different forms; it could be organizing, volunteering, educating. All of it is important, and it is especially important for women to embrace activism so that women’s issues don’t get sidelined as ‘gender concerns.’”

Cancer awareness programs and early screenings save lives. Any Women’s Committee members that are interested in networking with activists in Houston may do so by contacting Sarah Monderoy via email at Hibicus79@yahoo.com or Jackie Golphin at firecat1020@yahoo.com