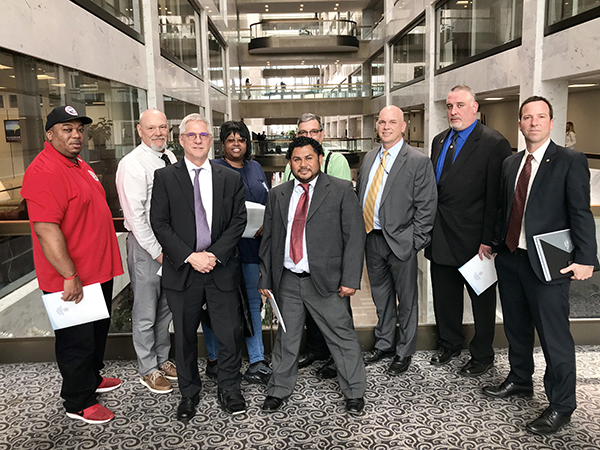 IAM Legislative Representatives recently gathered on Capitol Hill to support other affiliates of Metal Trades Department, a group of 17 national and international unions. The group met with members of Congress to discuss issues impacting the Metal Trades Unions.

The lobbying delegation focused on many issues, including protecting the Jones Act, awarding federal contracts to the Philly Shipyard amid layoffs, and securing back pay for those impacted by the government shutdown.

“The Jones Act has always been one of our most important issues because it keeps our ports secure and Americans at work,” said Jimmy Hart, President of the Metal Trades Department, AFL-CIO. “With the U.S. shipbuilding industry constantly under attack from foreign manufacturers, members of Congress need to know just how important the Jones Act is to our economy. We’re also here to ensure that the Philly Shipyard remains a priority following last year’s layoffs and to ensure that our members who missed payments because of the January shutdown are paid”

The Jones Act requires that cargo shipped between two points in U.S. waters be transported on American vessels crewed by American workers. It supports 650,000 American jobs across the United States.

The Philly Shipyards decreased its workforce from 1,200 workers to about 400 in 2018. Many members of Congress have already lobbied the Department of Transportation to grant the shipyard a contract.

Members from the Metal Trades Union will continue to fight to ensure that the key issues impacting their membership are a priority to those serving in Washington.

The Metal Trades Department is a trade department of the AFL-CIO. It was chartered in 1908 to coordinate negotiating, organizing and legislative efforts of affiliated metalworking and related crafts and trade unions. Seventeen national and international unions are affiliated with the MTD today. More than 100,000 workers in private industry and federal establishments work under contracts negotiated by MTD Councils. Workers retain membership in their own trade unions.