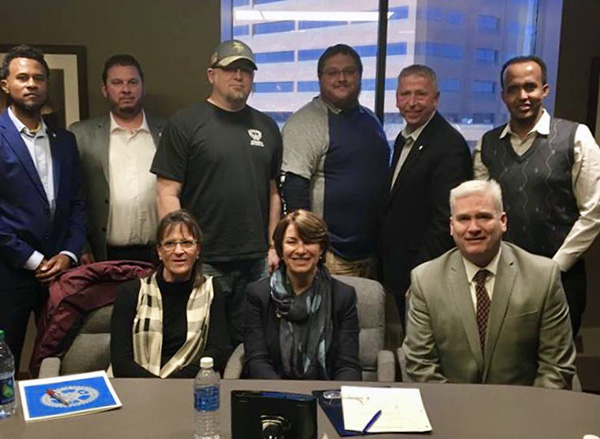 IAM Local 623 members are receiving an outpouring of support after management at Electrolux, a Sweden-based freezer and refrigerator manufacturer, announced the closing of its St. Cloud, Minn., plant. More than 900 IAM members will have their jobs terminated by 2020 if the company goes through with the closing.

On Saturday, Feb. 10, IAM members and leadership joined state and local politicians at St. Cloud City Hall to discuss what can be done for workers at one of the city’s oldest and largest workplaces.

“We talked about the apprehensions many of our members have,” said Directing Business Representative Colleen Murphy-Cooney, who used to work at the St. Cloud plant. “Unfortunately we have dealt with this in the past. Since 2004, Electrolux has closed plants and slashed thousands of jobs in Michigan, Iowa and Quebec.”

Met w/ Electrolux workers in St. Cloud alongside @SenTinaSmith & @RepTomEmmer & @MayorDaveKleis to help those affected by proposed plant closing in 2019. It’s a great long-serving workforce & we will work with @MachinistsUnion, area businesses, training programs to help them

A 2005 study estimated that a future closing of St. Cloud’s Electrolux manufacturing facility would reduce the area’s economic output by $90 million.

When I heard about Electrolux’s plan to close its St. Cloud manufacturing facility, it became a top priority to support the 900 Minnesotans impacted by the announced closure.

“These loyal, hard-working individuals and their families deserve dignity and respect from Electrolux,” wrote Martinez. “Treating workers in this fashion is simply unacceptable from any company seeking to act as a responsible employer.”

Electrolux management offered no advance notice of the plant closing before its Jan. 30 announcement. Kleis, the St. Cloud mayor, said the company told him as recently as December that it had no plans of closing the plant.

The IAM is also taking steps to help members at Harley-Davidson in Kansas City, Mo, who also learned on Jan. 30 that management plans on leaving the state and eliminating more than 800 jobs.

When companies like @harleydavidson and @Electrolux close plants and eliminate jobs, entire communities are left to pick up the pieces. We are doing everything we can to help @MachinistsUnion members in Kansas City and St. Cloud. Via @journalsentinel: https://t.co/AnrbWndGKX