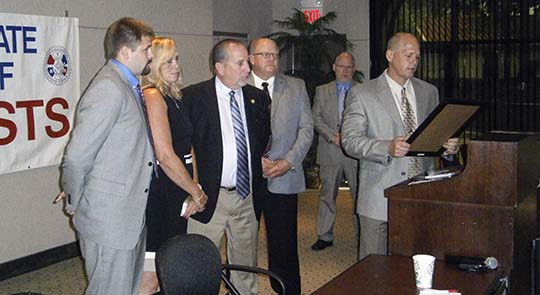 A resolution by the Missouri House of Representatives honoring departed friend and union brother, IAM activist Don Long of Local 778, Kansas City, MO, was presented to his family at the Missouri State Council of Machinists conference.

Long’s wife, Sharon, and his son, Levi, were invited to the conference for the presentation of the resolution by IAM Midwest Territory General Vice President Philip J. Gruber and the Missouri State Council of Machinists Executive Board.

The resolution thanked Long for the work he has done for the people of Missouri and for being a tireless advocate for workers in the state.

“We all miss Don very much. We were saddened by his passing,” said Gruber. “His legacy will live on forever in the hearts and minds of the thousands of working men and women he helped during his lifetime of dedication to the IAM and the labor movement.”