Missouri in Crosshairs of Right to Work for Less Ambush 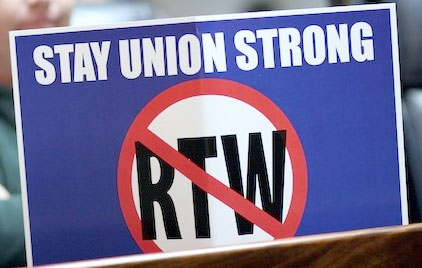 A Missouri Senate subcommittee has approved legislation that moves the Show Me State closer to becoming the 26th right-to-work (for less) state in the country.

The legislation – most recently passed and signed into law by anti-worker Wisconsin Gov. Scott Walker – forces unions to represent workers who don’t pay their fair share of dues, thus weakening the bargaining power of unions and ultimately driving down wages and benefits.

Missouri Senate Republicans, armed with model legislation from the corporate-funded American Legislative Exchange Council (ALEC), are trying to rush the right-to-work for less law through in the last week of the legislative session.

Barbara Shelly, a columnist for the Kansas City Star, has this take:

“Listen, union strength in Missouri is already diminished. If the General Assembly wants to finish them off, then lawmakers need to be prepared to spend money on job training and apprenticeships in the building trades; unions do that now. They’d better be ready to add more state workers to keep an eye on workers safety; unions do that, too.

“And if lawmakers really care about inequality and raising families into the middle class, as unions do, they’d better be prepared to take steps to promote that. A higher minimum wage would be the place to start.”

Missouri Republicans will have to pass the legislation with enough to support to override a near-certain veto from Gov. Jay Nixon, a Democrat.

Visit the “Stop Right to Work (for less) in Missouri” Facebook page for continuing developments.