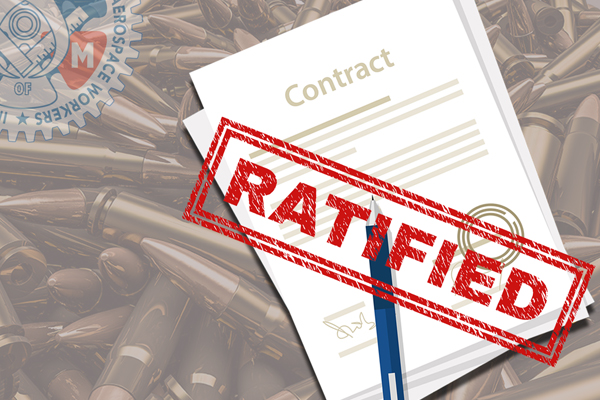 On July 18, 2020, more than 1,400 Local 778 bargaining unit employees working at Olin Winchester in Independence, MO overwhelmingly ratified a five-year agreement.  The newly passed contract will go into effect on October 1, 2020.

“Our first goal was to strip the contract of redundant and unnecessary company language and get more control back to the employees so they can better balance work and life.” said Local 778 Business Representative Scott Brown. “The second goal was to get the language that not only improved the lives of our members financially but respected their time at and away from work.”

“Congratulations to the members of IAM Local 778 employed at Olin Winchester,” said IAM Midwest Territory General Vice President Steve Galloway. “The improvements achieved in this contract have set a new standard and have given our members an even stronger voice within the Lake City Ammunition Plant. This is what collective bargaining is about. Thank you to all the IAM members who came together in solidarity for the purpose of securing better language for themselves and their families within this contract. And most importantly, thank you to the members of the IAM Local 778 Bargaining Committee, Business Representative Scott Brown and Directing Business Representative Joe Capra on a job well done.”

The IAM was able to accomplish this by focusing on the issues most important to the membership. The committee was able to negotiate a more than 3 percent yearly wage increase over the lifetime of the contract.

Negotiators also reduced monthly premiums for the working men and women covered under this contract, keeping out-of-pocket expenses at 30 percent for employees. Now, for the life of the contract, medical coverage is a guarantee.

For the first time, this negotiating team was able to lock in a 4 percent match on 401(k) and a 5 percent retirement contribution. In addition, all employees will be fully vested on the first day of the ratified contract.

“I would like to thank the entire negotiation committee for the months of preparation and the solidarity the committee displayed as they worked long hours to get a favorable contract for the membership,” said IAM Local 778 Directing Business Representative Joe Capra.