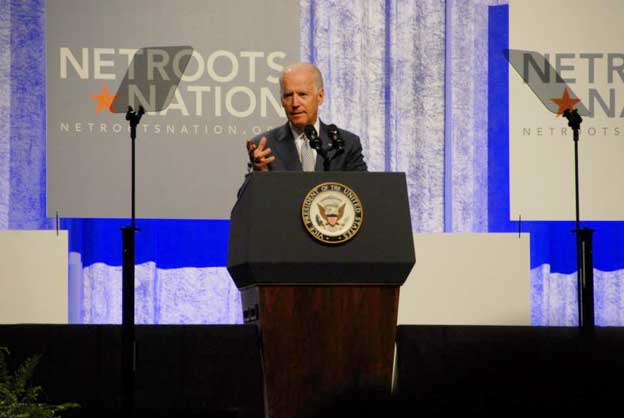 U.S. Vice President Joe Biden outlines the fundamental organizing principles that must be sustained through the 2014 midterm elections during his keynote address at the 2014 Netroots Nation conference in Detroit. (Photo by Bill Burke / Page One Photography)

Get to the polls in November. That was the overall directive given to the more than 3,000 attendees of the 2014 Netroots Nation conference – one of the largest annual gatherings of progressive leaders, activists, bloggers, newsmakers, social justice advocates, labor leaders, organizational leaders, grassroots organizers and online activists in the country.

This year’s conference took place in Detroit, a landmark city in U.S. labor history as it is home to the Big Three and the birthplace of the U.S. auto industry.

Click here to watch “Netroots Nation in Detroit” on the Machinists News Network.

But much has changed in the Motor City over the years. Today, Detroit is ground zero to one of the largest municipal bankruptcy filings in U.S. history. Thousands of public-sector union members and residents are fighting to ward off unprecedented cuts in public employee benefits, retiree benefits and city services.

As has been the case in previous conference cities in Netroots’ nine-year history, Netroots Nation was there to show its support.

“I want to thank the people of Detroit for hosting you and me,” said U.S. Vice President Joe Biden during the opening of his keynote address. “[This great city] is coming back. It will come back. And you’re going to be part of the reason of why it comes back, I might add.”

Each year, thousands of Netroots attendees come together to make new connections, hone their organizing skills, share best practices and build stronger relationships with others working on the issues they care most about.

While the 2016 race for the White House was indeed a topic of discussion, the spotlight of this year’s four-day conference was on the 2014 midterm election as Democrats try to hold onto control of the U.S. Senate.

“We are at an inflection point in national and world history,” said Biden, who started his career as a young man in the Civil Rights Movement desegregating movie theatres and facilities in his home state of Delaware. “What are we going to do? Our hands are on the wheel. And this is one of those moments and few times in our history that people get a chance to actually bend history a little bit – just a little bit. And ladies and gentlemen, we have to be clear – crystal clear – on what are the fundamental organizing principles we think this democracy rests upon. And fight like hell to make sure they are sustained and maintained.”

“Every American is entitled to a fair shot and a good job,” said Biden. “A job is about a lot more than a paycheck. It’s about respect. It’s about your place in the community. Most importantly it’s about your dignity.”

“The real job creators in America are the engineers, the sales people, the line workers, not just the investment bankers and shareholders,” he continued. “Everyone’s entitled to be treated with dignity for the contributions they make.”

AFL-CIO Secretary-Treasurer Liz Shuler led a caucus about women in the workplace. “We talked about the challenges that women face in the workplace, and they are many. And I think, particularly for union women, they need to see that the union is a place for women and we need to address more workplace friendly policies.”

Minnesota Democratic Rep. Keith Ellison announced plans to unveil legislation that would make union organizing a legally-protected civil right. The bill, which he plans to formally introduce July 30, would make it easier for workers to take legal action against companies that violate their right to organize.

“If it’s a civil rights action, it’s vindicating your personal right, first of all to freedom of assembly and freedom of expression,” said Rep. Ellison to MSNBC. “And it’s your individual right to say what you want. Whether or not there’s ever even a vote, you shouldn’t be fired for expressing an intent to support union activity.”

And in lieu of an annual community service outing, hundreds of Netroots attendees decided instead to organize and take part in a march and rally against Detroit’s water crisis. More than a thousand people took to the streets to protest the city’s plan to shut off water to more than 80,000 residents whose accounts were past due.

Many Detroit residents are struggling to keep up with their utility bills as the city grapples with soaring unemployment and extreme poverty. About 44 percent of Detroit residents live below the poverty level.

“We, the registered nurses of America, declare the city of Detroit to be a public health emergency zone!,” shouted Jean Ross, Co-President of the National Nurses United, at the rally. “The shutoff of water is a violation of human rights. This is not a natural disaster, which makes the shutoff of water especially immoral and unconscionable. Depriving Detroit residents of the water they need and deserve cannot be condoned under any circumstances in a civilized society!”

Three days after the rally, the city announced it was suspending the shutoffs for 15 days to give residents more time to pay their bill.

For more on the rally and Netroots 2014, click here to see photos on the Machinists Union Facebook page.

Click here to watch “Netroots Nation in Detroit” on the Machinists News Network.