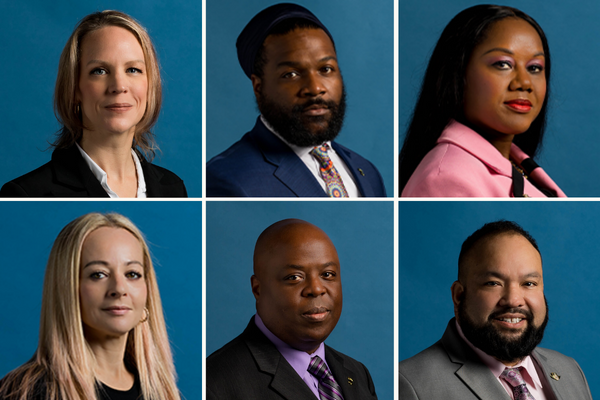 “We are thrilled to welcome each of these talented organizers whose background and expertise will strengthen the IAM,” said IAM Air Transport Territory General Vice President Richie Johnsen. “As our union moves forward and continues to grow, these appointments will allow us to meet the challenges ahead.”

“The new Associate Organizers’ wealth of experience will benefit our current and prospective members enhancing the IAM’s organizing goals,” said IAM Air Transport Territory Chief of Staff Edison Fraser. “We look forward to their contributions toward improving the lives of working Americans.”

Tiffany Lopez worked for United Airlines for approximately 24 years and has served as a shop steward in reservations for almost her entire career. Lopez has been an active member of IAM Local Lodge 141 and her roles included serving in the community service committee, Local Lodge Educator, Recording Secretary, Vice President and Local Lodge President.

Tom Marshall was hired with US Airways (now American) in his hometown of Philadelphia, PA. Within that same year he became an IAM member and a shop steward. Marshall served as a District 141 Educator and Vice President of IAM Lodge Local 1776.

Rachel Arnold worked for American Airlines since 2015. Arnold started as a ramp agent then transitioned to become  a tower planner. In addition to serving as shop steward and committee person for IAM District 141, Arnold is also a trustee and a Safety Steward for Local Lodge 1322.

Marilyn Soto started her career with Continental Airlines as Passenger Service in 1996 and then became a United IAM union member in 2012. Soto has served the membership as a shop steward , union organizer and educator participating in the Spanish Leadership Program at the William W. Winpisinger Education & Technology Center.  Soto attended John Jay College of Criminal Justice where she obtained a Bachelor’s Degree in Criminal Justice and Middlesex County College where she received her Associate’s Degree in Business Management. Soto is a proud member of Local Lodge 914.

Ducarmel Pierre started his career in the airline industry when he worked for Continental Airlines in Newark, NJ, in the 1980s through the 1990s. Pierre then worked for US Airways as a Ramp agent, lead agent and trainer. Pierre became a shop steward and then chief steward for IAM Lodge Local 1776. Pierre continued to advocate for his fellow colleagues in the air transport industry while working to organize new members at JetBlue.

Carmelo Benedicto worked for United Airlines for 17 years. Benedicto has been active in lAM Local Lodge 914 as shop steward, auditor and currently as an organizer. Benedicto received one of the 2021 Top Organizing Awards during the 40th IAM Grand Lodge Convention for his active involvement and contributions to the IAM’s organizing efforts. Benedicto is currently involved in the IAM’s JetBlue and Swissport Campaigns.