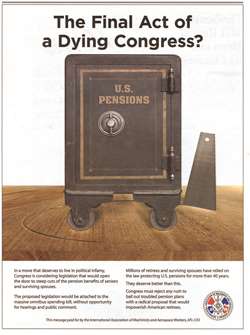 In its ongoing effort to fight Congressional attempts to cut multiemployer pension benefits of retirees and their surviving spouses, the IAM has taken out a full-page ad in DC political news favorites Politico, Roll Call and The Hill. The ad calls on Congress to reject any proposal that would seek to bail out a few troubled plans on the backs of existing retirees.

“[Is this] the final act of a dying Congress?” reads the IAM ad with a striking illustration of the lame duck Congress’ deceitful attempt to steal retirees’ pensions right from under them. “Millions of retirees and surviving spouses have relied on the law protecting U.S. pensions for more than 40 years. They deserve better than this.”

The legislation, which is being brokered behind closed doors, would be attached to the omnibus spending bill, and could take effect without opportunity for hearings or public comment.

Although the majority of the approximately 1,400 U.S. multiemployer plans are adequately funded, the proposal would allow pension fund administrators of a few troubled plans to reduce or eliminate the pension benefits of retired workers – setting a dangerous precedent for all other pension plans, including single-employer plans, public sector plans, and even Social Security.

The IAM, which administrators a fully-funded and healthy multiemployer pension plan, the IAM National Pension Fund, continues to urge Congress to consider other alternatives, including reasonable increases in Pension Benefit Guaranty Corporation (PBGC) premiums, adequate government funding for the PBGC, or allowing alliances and mergers of poorly-funded plans into healthier plans.

“Cutting retiree pensions is simply the wrong way to address the funding problem of pensions,” said IAM International President Tom Buffenbarger in a recent letter to Congress. “Advocates admit that their ‘solution’ may only help 40 percent of deeply-troubled plans. All available options must be considered.”

Tell Congress to vote “No” on the bill to cut multiemployer pensions for retirees.