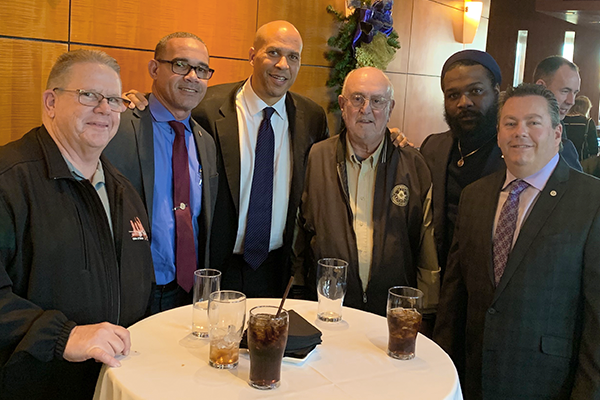 New Jersey State Council of Machinists President Cristino Vilorio, along with Executive Board members, this week met with U.S. Sen. Cory Booker (D-N.J.) and U.S. Rep. Donald Norcross (D-NJ) to thank them for their continued support of legislation that is beneficial to the over 20,000 New Jersey Machinists Union members.

“I thank Sen. Booker and Rep. Norcross for always advocating for legislation that will protect and enhance the workers of New Jersey,” said Vilorio. “The New Jersey State Council of Machinists will continue to urge our representatives to support the PRO Act, Build Back Better Act and any other bills that can create good union jobs in New Jersey for our members and their families.”

“The New Jersey State Council of Machinists, led by President Vilorio, is always at the forefront in protecting and enhancing the livelihoods of all workers in their great state,” said IAM Eastern Territory General Vice President Brian Bryant. “Our members are in good hands thanks to their hard work and diligence.”

Vilorio recently represented the IAM at President Biden’s Build Back Better event in New Jersey, which focused on the status of the Infrastructure and the Reconciliation Bill and how it will create thousands of union jobs in New Jersey and across the nation.