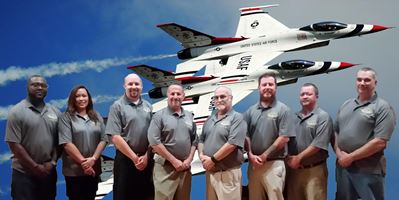 IAM Sin City Local 711 is hitting it big in the city built on dreams.

The burgeoning Las Vegas Local has reached several milestones since it was chartered in June. It’s exploded its ranks from 420 to 560 members in just two months, a 25 percent increase.

And they don’t plan on stopping there.

“That’s just the beginning,” said Local SC-711 Organizing Committee Chairman Bob Simoni. “We can expect to see at least another 200 new members through internal organizing and even more when some of the Nellis Air Force Base flying units convert from military to contractor.”

The Local is also prioritizing education, sending SC-711 members Keoni Antolin, Kelvin Finkley and Love Joy Smith to receive essential training at the IAM’s William W. Winpisinger Education and Technology Center in Hollywood, MD. The Local hopes to send more young leaders to the center for training, as they are already seeing dividends from their investment in education.

The training paid off for Local SC-711 members through recent contract negotiations with M1 Support Services, a Nellis Air Force Base contractor. The diverse contract includes more than 600 employees and spans 29 specialties from aircraft mechanic to librarian.

During the ratification meetings, Shepherd’s message to the members was clear.

“This is a flagship contract and would not have been possible without the tireless efforts of your Brothers and Sisters driving for these high levels of membership,” said Shepherd.

The negotiating team, supported by high density membership in a right-to-work state, was able to leverage momentum and achieve outstanding results.

“Since being chartered, the Brothers and Sisters of SC-711 are steadfast in their commitment to building power in Las Vegas,” said IAM Western Territory General Vice President Gary Allen. “It’s that type of determination that makes the IAM stronger to get better agreement at the bargaining table and grow this great union.”

Local SC-711 is also getting active in their community and politics. The Legislative Committee was able to meet with now-U.S. Sen. Catherine Cortez-Masto (D-NV) to discuss their unique concerns and accomplishments, and was proud to present her with a campaign donation on behalf of MNPL. The committee spokesperson said they intend on becoming much more involved with establishing the Nevada State Council of Machinists in the near future.