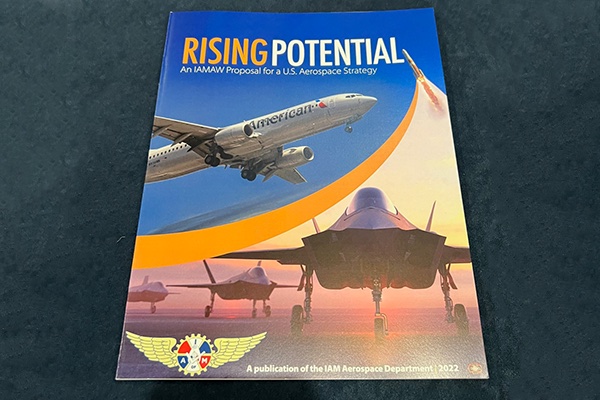 This week, the International Association of Machinists and Aerospace Workers (IAMAW), North America’s largest aerospace labor union, released a new detailed report analyzing the state of the aerospace industry in the United States. The report calls for a national aerospace strategy created by the government, private industry, and labor unions to maintain its standing as a world leader in the high-tech and high-skilled aerospace industry.

The report, “Rising Potential: An IAMAW Proposal for a U.S. Aerospace Strategy,” comes two years after one of the worst periods for the aerospace industry. Machinists Union members were among many workers in the aerospace industry who experienced layoffs and furloughs because of COVID-19. While air travel dropped significantly during that period, so did the need for parts, repairs, modifications, and other services, hurting aerospace supply chain companies.

For decades, the IAMAW has been the largest union in the aerospace industry. IAM members in all sectors assemble civilian and military aircraft, build missiles and rockets, manufacture parts and components, and provide maintenance, repair, and overhaul (MRO) services.

“Rising Potential: An IAMAW Proposal for a U.S. Aerospace Strategy” is a detailed report that provides an overview of the aerospace industry in the U.S., including international comparisons with some main competitors. It also outlines recommendations to address challenges and improve the nation’s foothold in the aerospace industry.

“The IAM has significantly contributed to making the aerospace industry dominant throughout the world,” said IAM Aerospace General Vice President Mark Blondin. “The contracts we have negotiated for our members continue to make this a sought-after career for many, especially our military veterans. Our members build the best products in the world, and it is only fitting that we help guide the national strategy for the aerospace industry. As one of the few core manufacturing sectors left not entirely ravaged by pro-corporate trade deals, it is of the utmost importance to preserve and expand the industry so it remains a reliable source of middle-class union jobs.”

“The IAM is proud of the research put into this report to help identify the aerospace and defense industry as a major economic engine for the American economy,” said IAM International President Robert Martinez Jr. “Our documentation helps cement our role as the working men and women who help make the industry thrive. For far too long, corporate executives and profiteers have monopolized our iconic industry, squeezing the public and weakening worker bargaining power. To maintain our standing in the world, we must provide the proper investment in the training of future aerospace workers. The IAM welcomes any partners who are willing to help achieve the goal of rebuilding our supply chains and creating jobs here at home.”

Key recommendations from “Rising Potential: An IAMAW Proposal for a U.S. Aerospace Strategy”: