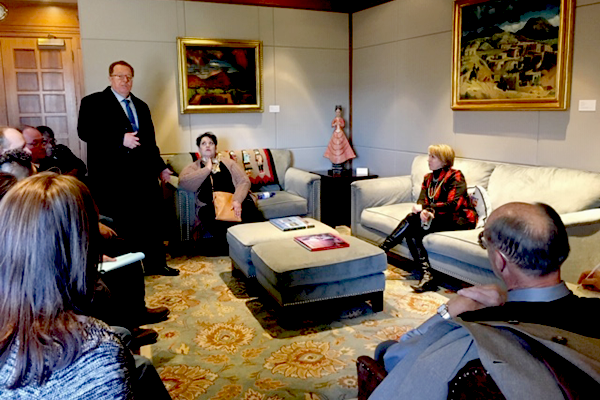 New Mexico Machinists have continually worked in conjunction with Michelle Lujan Grisham in her political career. First, the IAM played a pivotal role in her bid to gain the 1st congressional district seat and assisting her in her reelections thereafter. Then the IAM helped her secure the house of labor’s endorsement in the 2018 gubernatorial race.

Shortly after her inauguration, an invitation was extended to the governor to address the New Mexico State Council of Machinists. She accepted and in turn, invited the New Mexico IAM delegation for a private meeting in the governor’s office in Santa Fe. At the meeting, Gov. Lujan Grisham thanked the IAM and pledged her aid and support in attracting manufacturing jobs that will promote the development of apprenticeship programs geared for Machinists.

“The Western Territory is proud and grateful of the work Gov. Michelle Lujan Grisham has done to advance the interests of working families,” said Western Territory General Vice President Gary Allen. “We look forward to working together to build a better future for working people in the great state of New Mexico.”

Lujan Grisham is a staunch supporter of the labor movement and her record indicates such. She has continually been on labor’s side in the key battles faced by New Mexico’s activists. When the state was controlled by politicians that deployed an agenda to attack unions by introducing right to work legislation three times, as a Congresswoman, Michelle Lujan Grisham was one of the first to openly speak against the harmful legislation and was one of the leading figures that helped to convince her colleagues in the New Mexico House to kill those bills. She vows to sign the anti-right to work bill that is currently on the floor once it hits her desk.

On a national stage as a U.S. Representative, Lujan Grisham placed the interests of unions and working families first; inspiring many IAM members to work tirelessly on her campaign to win the governor’s seat, logging long hours of phone banking and canvassing.

The IAM thanks Governor Lujan Grisham for her contributions and her positive impact on working families and unions.