New Overtime Rule Means 12.5 Million Workers Will Soon be Getting a Raise 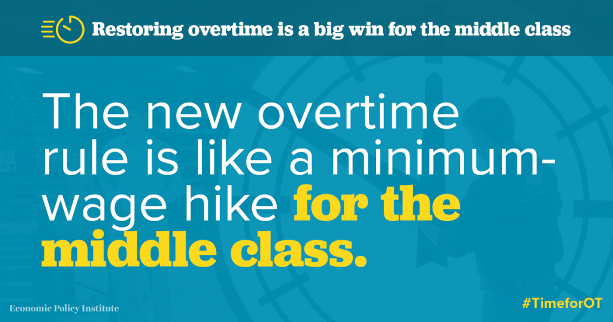 The Department of Labor has announced a doubling of the overtime threshold for salaried workers from $23,660 to $47,476. The long awaited change qualifies workers for overtime when working more than 40 hours a week.

The new overtime rule will benefit 12.5 million workers according to a recent Economic Policy Institute report.

READ: Seven Things You Need to Know About the New Overtime Rules

“The fight for even stronger overtime protections and to raise wages for all working people continues,” said AFL-CIO President Richard Trumka. “But today, millions of workers will receive a long overdue raise, healthier and more productive jobs, and more time to spend with our community and loved ones.”

The rule change has been a long time coming and much needed. In 1975, about 62 percent of salaried American workers were covered by overtime protections, compared to 7 percent of workers today.

Employers have used the low threshold to cheat workers out of higher wages, with many workers putting in hours at no extra pay. Too many Americans were seeing their per-hour rate drop below the federal minimum wage of $7.25.

Workers in the South, a region of the country where the IAM has been working hard to organize, are most likely to benefit. More than 30 percent of the salaried workforce in South Carolina, West Virginia and Arkansas will benefit from the rule change.

The new threshold takes effect December 1, 2016 and will adjust for inflation every three years.