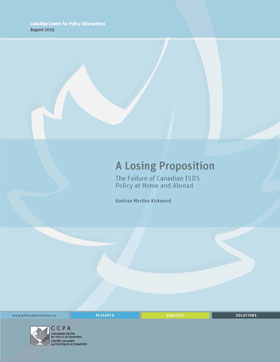 A new study by the Canadian Center for Policy Alternatives (CCPA) shows the dangers of the Investor-State Dispute Settlement (ISDS) system that will likely be part of the Trans-Pacific Partnership Agreement (TPP). The ISDS system allows corporations to use private World Bank or United Nations Tribunals to demand compensation if a country’s environmental, safety, or other laws diminish that corporation’s potential profits.

In many of the ISDS cases arising out of existing trade agreements like NAFTA, corporations target environmental, worker safety and other laws that tend to be in more developed countries. But the CCPA study shows that multinational corporations, such as Canadian resource corporations, are using the ISDS system to attack resource management and environmental protections in developing countries as well.

“ISDS is supposed to protect foreign investors from arbitrary government actions, but in practice it is being used by multinational corporations to bully democratic governments into backtracking on actions taken in the public interest,” says the report’s author, Hadrian Mertins-Kirkwood.

The study bolsters claims by opponents of the pending TPP that the trade deal will further consolidate economic power in the hands of multinational corporations.

“Of the 55 cases identified in the study, only four resulted in a favourable outcome for the Canadian investor. In comparison, Canada has lost nearly half the ISDS cases it has faced from foreign investors, and has been pressured into backtracking on important public health and environmental regulations as a result of those losses,” concludes the study.

Click here for more information on the CCPA study.