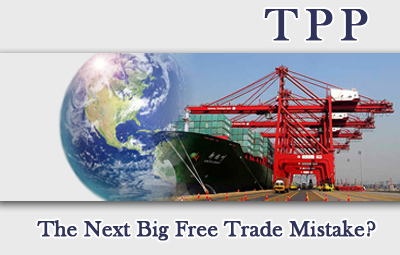 TPP – the largest free trade agreement in U.S. history – is being negotiated right now by U.S. trade representatives and nearly a dozen other countries. But, negotiations are being held in secrecy, behind closed doors. Access to TPP draft language is limited almost exclusively to a handful of government negotiators and deep-pocketed corporate advisers.

“In the past, corporations have hijacked trade deals like the TPP in order to reap the benefits for themselves while destroying good jobs and polluting our air and water,” said Celeste Drake, Trade and Globalization Policy Specialist for the AFL-CIO. “For working people, these trade deals have meant closed factories and lower wages, the rolling back of regulations that protect our water, air and food and more veto power for corporations over public health and safety policies. The sad thing is most people don’t feel the effects of these destructive trade policies until long after corporations have gotten their way in closed-door negotiations. We can’t let that happen with the TPP.”

The video shows working people from across the world speaking out about the TPP and its consequences. Viewers are being asked to take action by watching the video and sending an email to trade representatives for all the countries involved, telling them to create a trade agreement that works for working families.

The TPP is slated to be the biggest free trade agreement since NAFTA,” said IAM International President Tom Buffenbarger. “Despite the potential for the TPP to negatively impact hundreds of thousands of American jobs and jobs of people all around the world, the agreement also threatens to make it harder for workers to organize. IAM members are urged to take action today and demand an agreement that puts people first. Not corporations.”