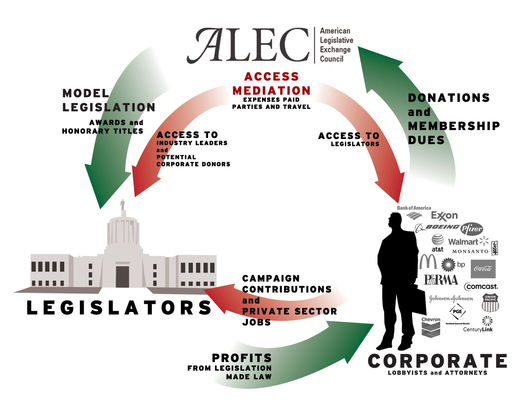 Following the money just got easier.

The Center for Media and Democracy (CMD), publishers of ALECexposed.org, and ProgressNow have joined in the release of a new website that shines a much-needed light on the State Policy Network (SPN), a web of so-called U.S. “think tanks” that claim to be nonpartisan and independent, but are major drivers of the right-wing, ALEC-backed agenda hijacking state houses across the country.

The findings stem from CMD and ProgressNow’s November report entitled “Exposed: The State Policy Network,” showing SPN has deep ties to the Koch brothers and a national right-wing network of funders – all while reporting little or no lobbying activities.

“‘Exposed: The State Policy Network’ shines a light on a network of well-funded, ostensibly independent state-based think tanks that are hard at work undermining workers’ rights and environmental and consumer protections, and establishing a climate in which it’s all but impossible to hold their corporate funders accountable,” reads an article on Salon.com.

Track the right-wing cash flow and learn more about their local agenda for your state by clicking here.