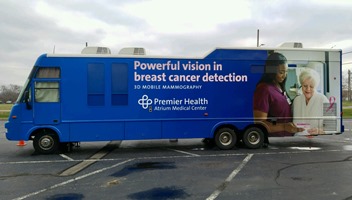 In the eight short months the newly formed Women’s Committee of IAM Local 1943 in Middletown, OH has been up and running, they’ve wasted no time in making their presence known.

Almost immediately the committee organized and held the first of many self-defense classes geared for women. Later, to help fund their efforts, a “Dine 2 Donate” was held at a local establishment with the committee receiving a percentage of the sales when members presented a special coupon.

This Monday, the committee held their most important event to date – bringing the Atrium Medical Center Mobile Mammogram to the local, situated conveniently at one of the employer’s main gates.

“Far too many women don’t make the time to get proper health screenings,” said Women’s Committee Chair Lori Kakaris. “Between trying to work, and taking care of family needs, it is often put off when inconvenient. That’s why we decided to bring the exam to them, where they literally drive right by on the way in or out of the parking lot.”

The small, but growing committee all received thanks from the women who took advantage of the opportunity for the screening.

The 2D mammograms were covered at not out of pocket cost by the employee’s health insurance. A 3D screening was available for $40.

“All women are at risk of breast cancer,” said IAM Eastern Territory General Vice President Jimmy Conigliaro, Sr. “Early detection is the key to saving lives, and by making this available on location greatly increases the opportunities available to members for screening. I’m very proud of the efforts by the Women’s Committee.”

“Thanks go out to Lori Kakaris, Jenny Meyer, Cindy Steele and the entire Women’s Committee,” said IAM Local 1943 President and Directing Business Representative Neil Douglas. “Their hard work and planning made this a successful effort for a much needed preventive exam.”