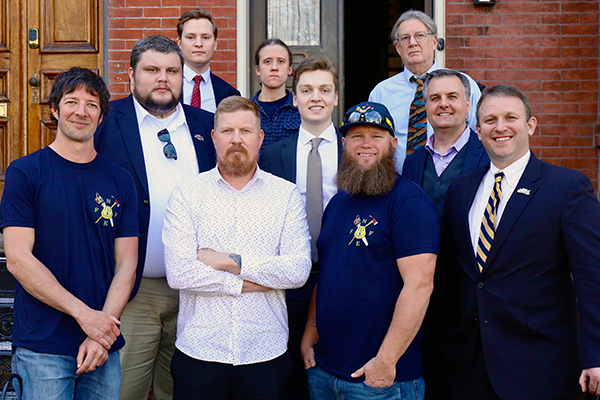 Ahead of another intense wildfire season, roughly a dozen NFFE-IAM firefighters, who service government-owned land, forests and parks, spent this week in Washington, D.C. urging lawmakers to address critical concerns such as an urgent need for wage increases amid increasing costs of living, improved health and wellness coverage, and better working conditions.

“We need to make changes right now. That starts with a $20 per hour base minimum wage,” said NFFE-IAM National President Randy Erwin. “The President increased the minimum hourly rate to $15 last year, and for that we are grateful, but more work must be done.  Applications for employment are down 40% or more and we are losing experienced firefighters to state and local fire services.  It is becoming impossible to recruit and maintain the qualified workforce needed to address longer and more destructive fire seasons every year.  It’s putting more pressure on those who are working and they’re suffering, which is why are here in D.C.”

Robert Beckley, a NFFE-IAM National Vice President and Montana native who began fighting wildfires in 1975, says climate change has made the terrain more vulnerable to intense wildfires.  These fire are hot enough to effectively kill forests by ‘sterilizing’ the ground, preventing regeneration on swaths of land that cover 100,000 acres or more.

“With climate change, with drought conditions, with insect infestation that damages trees, I’m noticing the lands are getting hotter and more trees are dying and rotting,” said Beckley. “That’s creating more fuel on the ground. When there’s a fire, it’s harder to control, it’s harder to put out and it demands more attention and more resources.”

An additional concern is seasonal NFFE-IAM firefighters, a significant portion of the workforce, many of whom have limited access to health insurance and are not eligible for government retirement. Retirement benefits for full-time firefighters, which require 20 years of service, does not cover seasonal NFFE-IAM members even if they worked 20 years of equivalent time simply because they are not full-time permanent employees.

“The wildland firefighters are often on their own after they are injured,” Beckley continued.  “It is especially hard for seasonal firefighters who have no insurance or retirement to fall back on.  For seasonal and full-time firefighters, it’s the same hot, dirty, nasty job that takes its toll on a body and mind.”

NFFE-IAM says the visits in Washington, which included meetings with representatives from the White House and lawmakers on Capitol Hill, were productive.

“This is a bipartisan issue. We’re ready to work with members on both sides of the aisle to get things done this year,” said Erwin. “Every office that we visited understood our needs. Now it’s important for them to push legislation and get firefighters and our national landscape the help they need.”

Great to have @NFFE_Union wildland firefighters at the @WhiteHouse today!

Thank you, @Richmond46 and @EDinkelSmith46 for hosting these essential workers. https://t.co/knFKndnV5s