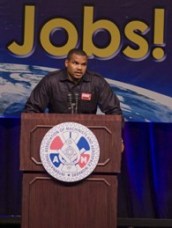 In the latest chapter of a relationship that goes back decades, two members of the National Football League Players Association (NFLPA) addressed more than 600 IAM representatives gathered in Houston for the 2010 National Staff Conference.  Offensive lineman Chester Pitts (pictured at left) and running back Steve Slaton (pictured at right), both of the Houston Texans, were greeted with a standing ovation that grew to touchdown volume when they voiced their strong support for union members employed by NASA at the nearby Johnson Space Center.

“I’m going to keep it simple and speak from the heart. I’m a union man and I’m here to support your cause,” declared Pitts, who underscored the importance of unions working together. “Our players union is a strong union but with minimal numbers. We team up with the AFL-CIO and the Machinists and the Electrical Workers… it’s all about strength in numbers.”

The IAM has a long history with the NFL Players Association that includes providing them with office space for many years at IAM Headquarters during the union’s formative years.

“The Players Association is in the midst of a struggle that should sound familiar to union members anywhere,” said IAM President Tom Buffenbarger. “Team owners are proposing historic cutbacks while making unprecedented profits. The circumstances may be different, but the need for workers to stick together is the same everywhere, whether it’s at NASA, at Delta Airlines or the NFL.”