No Vote Until NAFTA is Fixed 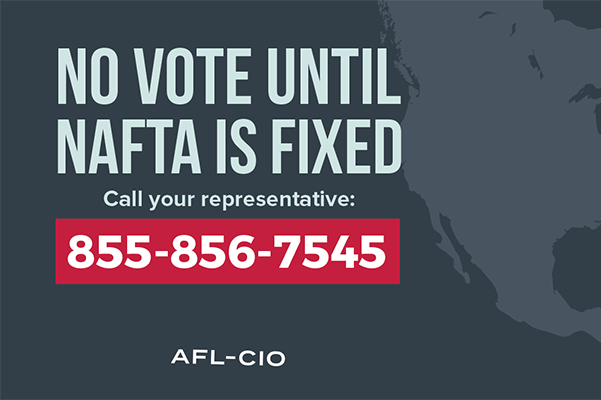 For more than a quarter-century, North America’s working families have raised their voices for better trade policy. The defenders of corporate-dominated trade rules too often portray trade as an end in itself. But trade is not an end, it is a means.

Trade policy must be judged by whether it leads to a just, inclusive and sustainable economy. An economy that works for all, regardless of race, gender or national origin and that in particular lifts up the most vulnerable.

By that measure, NAFTA, which has driven the outsourcing of so many good jobs, especially in aerospace and manufacturing, has been a catastrophic failure. The labor movement has made clear that we need a new deal that makes a real difference in stemming outsourcing and improving workers’ lives. Work on this issue is far from complete.

This morning, take a second and call your member of congress and urge them to take no vote on the 'new' #NAFTA until it is fixed. #1u

Sign and share the petition: Add your name and say no vote on NAFTA until it is fixed