< Back to Nurses Threatened by ? Kentucky River’ Rulings 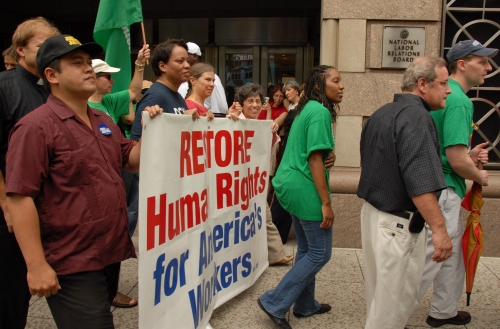 Rallies in 18 cities nationwide and a large labor crowd outside NLRB headquarters in Washington D.C. protest upcoming anti-labor rulings by the Bush-appointed board.

Hundreds of nurses at the Eastern Maine Medical Center (EMMC) in Bangor, ME who are working to win a voice at work with the Machinists union, could be barred from union membership by the upcoming “ Kentucky River” rulings from the National Labor Relations Board (NLRB).

The NLRB, comprised solely of Bush appointees, is poised to rule on a trio of cases known collectively as the “ Kentucky River” cases. The rulings could bar EMMC nurses and thousands of others around the country from joining unions by expanding the definition of “supervisors” to include almost anyone who provides instruction to another worker. Supervisors are traditionally denied the right to union representation and collective bargaining.

The NLRB is refusing to hear even oral arguments in the three cases that could have an enormous impact on collective bargaining rights for hundreds of thousands of workers.

Workers in 18 cities, including Bangor, will take to the streets during the week of July 10 to bring attention to the actions of the anti-worker actions of the NLRB. Click here to send a message to your member of Congress and urge them to tell Bush’s labor board to reverse its decision and allow oral arguments in the “ Kentucky River” cases.