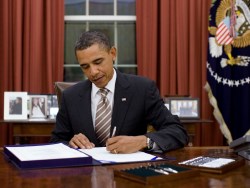 A streamlined and simpler election process for workers seeking a union will stand after President Obama vetoed a Republican measure that would have blocked the common sense rule changes.

“Workers need a strong voice in the workplace and the economy to protect and grow our nation’s middle class,” said Obama. “Unions have played a vital role in giving workers that voice, allowing workers to organize together for higher wages, better working conditions, and the benefits and protections that most workers take for granted today. Workers deserve a level playing field that lets them freely choose to make their voices heard, and this requires fair and streamlined procedures for determining whether to have unions as their bargaining representative.”

“President Obama is right in his commitment to vetoing this harmful legislation, and Congressional Republicans should focus their efforts on lifting workers up instead of shutting them out,” said AFL-CIO President Richard Trumka.