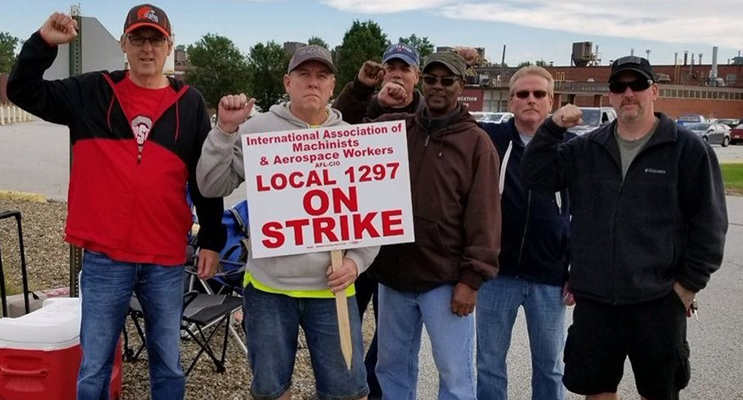 IAM Members of Local 1297, District 54 employed at Vesuvius USA Corporation overwhelmingly ratified a new five-year deal on Friday, September 28, ending the brief, but effective strike. The strike came after members voted unanimously to reject a so-called last, best, and final offer from the employer that made draconian cuts across the board.

The new accord, ratified by a 3-to-1 margin, features a wage increase of nearly two percent over the life of the agreement, and tremendous improvements to the 401(k) savings plan match. The plan will increase to a 7.5 percent match, with a four percent total yearly gross salary match that will also be dropped in their 401(k) plan once a year. On October 1, a $2,000 lump sum drop-in will also be added by the company.

In addition to the 401(k) increases, an Early Retirement Agreement (ERA) was added for employees 61 and over.

The Negotiating Committee also beat back attacks on healthcare, removing a proposed surcharge for spousal coverage. The new contract will go into effect immediately, and the workers reported to work as normal on Monday, October 1.

“The addition of the ERA was a major achievement,” said IAM District 54 President and Directing Business Representative T. Dean Wright Jr. “The Negotiating Committee and the membership stood strong on the issues and the result was one hell of a retirement package for our members. I am extremely proud of what we were able to achieve and my thanks go out to the committee and this membership for their solidarity.”

The 401(k) savings plan is in the top three percent in the country, and as a result, several eligible members took steps immediately Monday to put their retirement in motion. The senior-most member doing so is estimated to receive more than $60,000.

“Workers across this country are saying enough,” said Eastern Territory General Vice President Jimmy Conigliaro Sr. “Nearly 80 percent of working families in America say they are living paycheck to paycheck, and the assault on workers doesn’t end there. Healthcare is being decimated, while costs are on the rise. The dream of a decent, carefree retirement is slipping away. Congratulations go out to PDBR Wright and everyone at Local 1297 for standing together to achieve an agreement that reflects their dedication and hard work.”

The company also called back all workers currently on layoff and plans to hire nearly a dozen more, replacing all members taking the improved retirement.