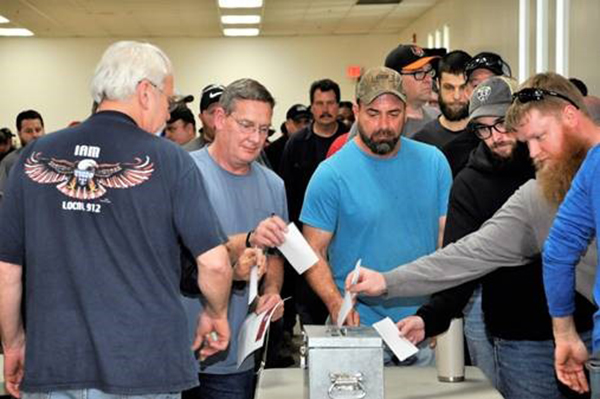 As they head in to negotiations, IAM Local 912 members sent a strong message to General Electric last week with a nearly unanimous strike authorization vote.

“Right now is our time,” Aerospace General Vice President Mark Blondin told members and representatives prior to the vote for IAM Local 912 in Evendale, OH.

“In the past you have agreed to contracts that helped get GE through difficult times, but today is different,” continued Blondin. “Aerospace is on the rise, we need to make up for lost ground and get secure retirements, affordable healthcare and better wages.”

The vote coincided with a pre-negotiations benefits and business update meeting between GE company officials and the General Electric Coordinated Bargaining Committee (CBC), a main table coalition of 11 unions including the IAM.

“I want every IAM member at General Electric to know that we will use every resource necessary to get them the contract they deserve,” said IAM International President Robert Martinez Jr. “We must stay strong and keep our solidarity to ensure fair treatment for the working people who have made this company what it is today.”

“We are asking you for your support,” said IAM Collective Bargaining Director Craig Norman, who will be leading negotiations on behalf of the IAM. “Solidarity and support for your leadership and the bargaining committee will be key to these negotiations. This vote today is the first step in demonstrating your solidarity and sending a clear message to GE.”

Local 912 is the first of the CBC affiliated unions to hold their strike sanction authorization vote, and their response was loud and clear—voting 98 percent in support of the strike authorization.

CBC main table negotiators will be meeting April 16 and 17, 2019 in Dayton, OH to continue to prepare for the official start of negotiations in June 2019. The healthcare CBC subcommittee will meet on April 10-12, 2019 for continued work on the proposals.