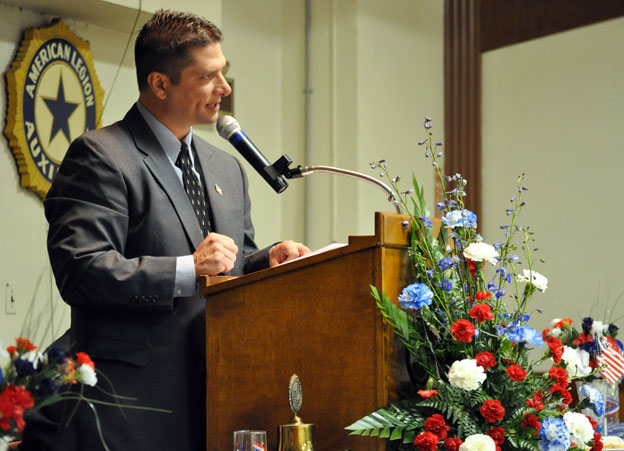 IAM Local 1943 has a long history of supporting veterans that stretches back to 1914 when workers in Middletown volunteered to form the Armco Ambulance Corps, a detachment of workers supporting front line troops in World War I. Current IAM members of Local 1943 support veterans and current active duty personnel with payroll donations and by raising $30,000 to build the veterans memorial at Woodside Cemetery in Middletown. (http://www.woodsidecemetery.org/veterans-memorial-flash.shtml).

Each year, Douglas and Local 1943 staff and members also play an important role in the annual Veterans Memorial Scholarship Golf Event, which helps area veterans and their families further their education.

“My service taught me what honor, sacrifice, and duty really mean,” said Douglas. “The end of my service didn’t mean it was the end of my journey with our military. I felt the bonds made and lessons I learned should be brought back to my union, community and the company I work for. Passing on these lessons is not enough. We must also give back to those that instilled these lessons, many making the ultimate sacrifice.”

“It’s important to honor our veterans’ service and sacrifice every day, not just on November 11,” said GVP Lynn D. Tucker, Jr. “The homeless rate for veterans in the U.S. is a deplorable 1 in 4 and combined with the number of servicemen and women not receiving the care they need, it is unacceptable.”

The unemployment rate for post-Sept. 11 veterans remains at 10 percent, which is above the national average. Suicide rates among veterans account for one-fifth of all suicides in America. Since 2001, more veterans have died by suicide than have been killed serving in Afghanistan. This year alone the Army is averaging one suicide per day.