Ohio Machinists Focus on the Future 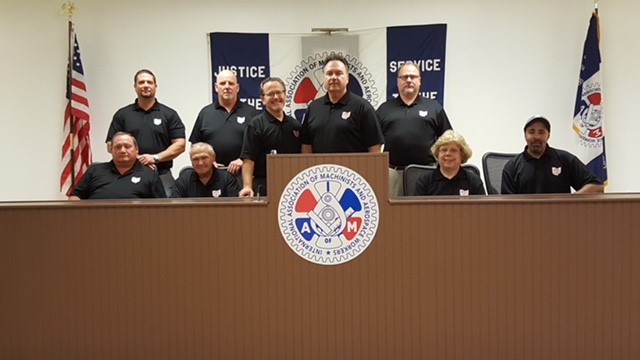 Delegates from across Ohio and West Virginia flooded into Columbus recently for the annual Ohio State Council of Machinists fall meeting. Delegates greeted an all-star lineup of labor-friendly candidates, including Senator Sherrod Brown.

State Council President T. Dean Wright Jr., kicked off the meeting addressing the current climate in Washington, saying “his administration divides us – we are looking for candidates that will bring us together and strengthen the middle class.”

Delegates heard from candidates seeking office across Ohio, and the council took action to endorse.

“The working families of Ohio want representatives who are going to stand up for workers’ rights,” said Wright. “They want candidates that will continue to work with the labor movement, standing up against harmful legislation that would lower wages, create unsafe working conditions and damage collective bargaining rights.”

Eastern Territory General Vice President Jimmy Conigliaro Sr., updated the delegates on activities within the territory, and the importance of growing the IAM for the future.

“Growing our great union should be everyone’s focus,” said Conigliaro. “There are too many working people who don’t have a union, or the respect and dignity that comes with a solid collective bargaining contract. Many of them work in this so-called gig economy, or independent workers, and we are the only ones that can fix that. There’s no reason these workers, regardless of how they are labeled, shouldn’t have the same benefits and privileges that those of us in the labor movement enjoy.”

One of the featured events was Local 1297’s Guide Dogs of America (GDA) Texas Hold’em Poker Benefit Tournament. District 54 staff, delegates, and the 32 affiliated locals raised nearly $21,000 for GDA, MNPL, and the IAM Disaster Relief Fund that has been providing support for members affected by hurricanes in Texas, Florida, Puerto Rico and the U.S. Virgin Islands.

“I’m extremely proud of the staff of District 54 for their efforts to raise funds for these all important efforts,” said Wright. “Our members embody the IAM motto of Service to the Community.”

For a full list of OSCM endorsements, visit iamoscm.org