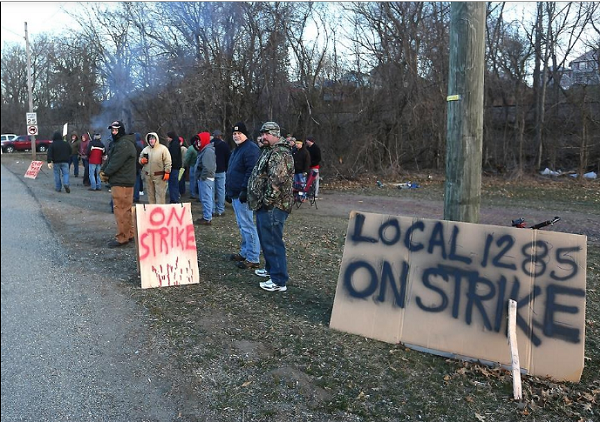 A company attack on healthcare is being met by a strike of nearly 200 IAM Local 1285 (District 54) members at Gradall Industries in New Philadelphia, Ohio.

The excavator manufacturing company wants the ability to arbitrarily change employee healthcare benefits and contributions. In 2016, the company used similar language to yank coverage from spouses of employees covered by another employer-provided plan.

“Our Brothers and Sisters chose to stand and fight for quality healthcare for their families,” said District 54 President and Directing Business Representative T. Dean Wright Jr. “The members of Local 1285 have the full support of IAM District 54, the Eastern Territory General Vice President Jimmy Conigliaro Sr. and the entire Eastern Territory staff as long as it takes to get a fair and equitable contract.”

The IAM and the Negotiating Committee notified the company that they remain ready, willing and able to return to the bargaining table when the company is prepared to seriously address the concerns of the members. Gradall says it will meet with the IAM on Wednesday, March 14.

“The resolve of our members is unwavering,” said Eastern Territory General Vice President Jimmy Conigliaro Sr. “They will not be deterred by this company’s heavy-handed tactics. Their fight for decent, affordable healthcare isn’t just for their families, but for all working families in this community.”

“I’m very proud of our Sisters and Brothers at Gradall for taking a stand for not just their families, but for all working people,” said International President Bob Martinez. “We will never back down from any company that chooses corporate greed over hard-working, dedicated working men and women. This union stands fully beside the members of Local 1285 and the Eastern Territory leadership team fighting alongside them.”

Picket lines went up at midnight on Monday, March 12.