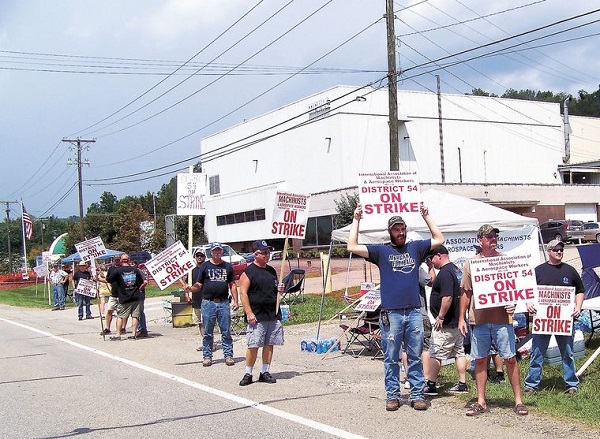 Nearly 50 members of IAM Local 1471 at Mahle Engine Components hit the picket line this week after overwhelmingly rejecting a contract proposal from the company and voting to strike. The members work at the McConnelsville, OH plant which manufactures various engine components.

A main point of contention is language regarding plant shutdown and layoff notification. The current agreement provides protection for any shutdown of a week or longer. However, the company has proposed language that would allow shutdown and layoff without notification for shutdowns of less than a week. Other issues, include wages and contributions to the IAM National Pension Plan.

“The plant layoff notification language is an all-important protection for these workers,” said IAM District 54 President and Directing Business Representative T. Dean Wright, Jr. “The loophole the proposed language would create is a gamble our members can’t afford to take.”

IAM Negotiators notified the company immediately that they are ready and willing to return to the bargaining table to resolve these issues.

“We contacted the company immediately to notify them of our intent to return to the table, and work toward an acceptable agreement,” said District 54 Business Representative Don Riffee. “As a result, the company has agreed to resume negotiations on Wednesday, August 30, along with a Federal Mediator.”

“These workers understand the importance of a good union contract, and the protections it provides for working families,” said IAM Eastern Territory General Vice President Jimmy Conigliaro, Sr. “These members are standing together in solidarity to protect their future from a loophole that could be exploited by the company to drastically affect their take home pay.”