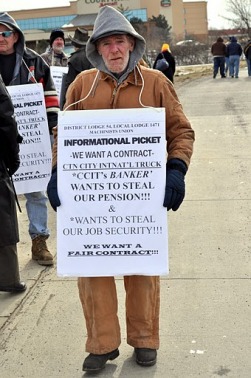 IAM members of Local 1471 in Columbus, OH, braved freezing temperatures and sub-zero wind chills last week to provide members and the community with updates regarding an attempt to eliminate pensions for workers at Center City International Trucks (CCIT).

Local 1471 members have been working without a contract since the previous agreement expired in November of last year. While the IAM returned to the bargaining table last week in a bid to resolve the dispute, union negotiators were outraged to find a new proposal from the company that would terminate participation in the decades-old and secure defined-benefit pension plan.

“This is not just an attack on these members at CCIT,” said District 54 PR/DBR Dean Wright. “This is an attack on the labor movement right here in the heart of Ohio, a labor union state. I call on each of you to help us in this fight before it spreads like the cancer it is.”

IAM members work as mechanics at CCIT and literally keep Columbus and the state of Ohio moving. From the buses that safely transport children to and from school, snow removal equipment, garbage trucks, fire and emergency responders, right down to the tow trucks that bring them in for repair.

“In addition to the company’s attempt to gut the employees’ pension plan, CCIT is also proposing a myriad of concessions when the company is financially sound,” said Wright.