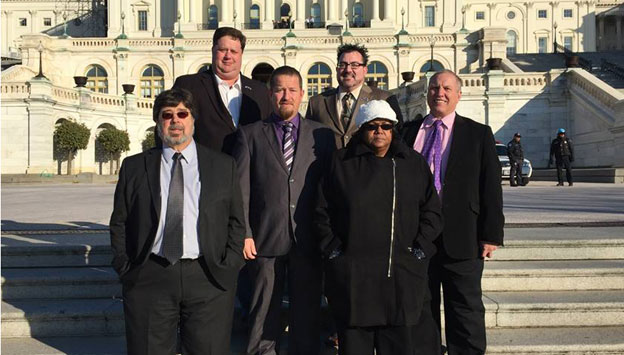 Members of NFFE-IAM Locals 1840, 1855, 1697 and the Forest Service Council went to Capitol Hill to petition Congress to save the Treasure Lake Job Corps Civilian Conservation Center in Indiahoma, OK.

When the U.S. Department of Labor announced its intent to close the Treasure Lake Job Corps Civilian Conservation Center in Indiahoma, OK, the NFFE-IAM members who work at the center knew they had to act.

Not only were their jobs on the line, but they were also standing up for at-risk youth who receive education and vocational training at the southern Oklahoma facility. Treasure Lake, a source of pride in Indiahoma for more than 50 years, pumps over $6 million annually into the local economy.

NFFE-IAM Local 1840 members gathered signatures on a petition to save the center, rallied area businesses to oppose the closure and contributed to several local news articles. But when the Labor Department issued a final notice of their intent to close Treasure Lake, Local 1840 members joined with brothers and sisters from NFFE-IAM Locals 1855 and 1697, as well as the Forest Service Council, to meet with members of Congress in Washington, DC.

NFFE-IAM members met with the representatives of the “Friends of Job Corps Caucus,” as well as Sen. Jim Inhofe (R-OK) and Rep. Tom Cole (R-OK).

“When we heard that the Department of Labor was aiming to close Treasure Lake, we knew we had to take action,” said Shawn Patterson, Forest Service Council Vice President of the Civilian Conservation Corps. “We have a duty to protect the jobs of NFFE-IAM members, and Treasure Lake’s closure would do just that. So we came to Washington, DC to build a bipartisan coalition of supporters in Congress. While we often hear how polarized Congress is and the attacks on federal employees, this is an example of a bipartisan effort to protect good-paying, federal jobs. We are hopeful for the future of Treasure Lake.”

Following numerous meetings on Capitol Hill, the NFFE-IAM members say it’s clear there is a potential legislative solution to save Treasure Lake, although that solution is not a sure thing at this point. NFFE-IAM will be pushing Congress to act in the coming weeks.