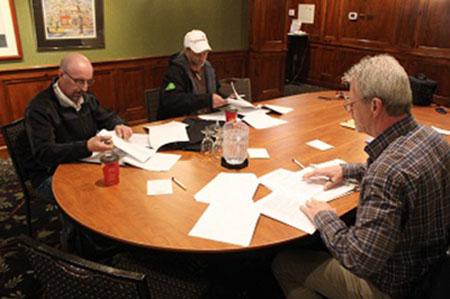 “We came within four hours of going out on strike,” said IAM Grand Lodge Representative Ralph Martin. “The membership stood behind the bargaining team and that was the difference.”

The three-year agreement provides wage increases of 3 percent immediately and another 3.5 percent by the end of the second year. The contract also brings the workers into the IAM Labour/Management pension plan.

“Getting a pension plan was a key demand with this membership and to get one in the first contract has made everyone happy,” explained Martin. “These members are looking to their future and this is a great first step.”

The agreement includes substantial vacation improvements, with employees receiving three to four weeks a year instead of being limited to two. Employees will no longer have to pay for all of their medical benefits. The employer will be paying 70 percent by the beginning of the third year of the agreement.

Employees will also be eligible for bereavement leave, and the company will pay for uniforms, safety boots and all other necessary personal protective equipment.

“To get this much language in the first contract is very difficult,” explained Martin. “Our members are very pleased.”

The IAM in Canada represents members at five of the seven auto dealers in the area. It also represents automotive workers in Toronto, Fort Frances, Thunder Bay, as well as in New Brunswick, Newfoundland, on Vancouver Island and the lower mainland of British Columbia.