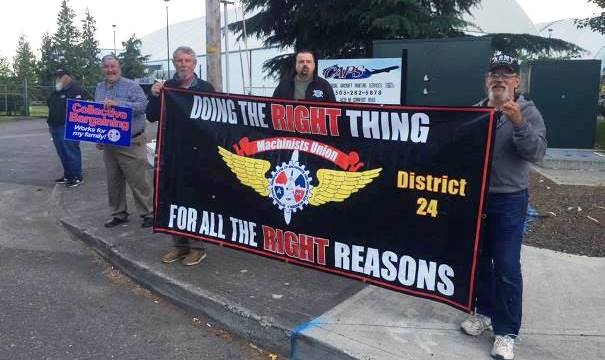 The 165 new members work in large hangars at Portland International Airport where they paint new Boeing aircraft, mainly 777s and 747s, before final delivery to customers.

Workers reached out to the IAM for representation due to many of the company’s policies regarding work schedules, advancement and benefits. The work involves hazardous chemicals, and turnover rate is very high. Additionally, wages average about half those of IAM Boeing employees doing similar work in Everett, WA.

The IAM began the organizing campaign in March and a request for a National Labor Relations Board (NLRB) election was issued in June. CAPS followed that request by launching an anti-union campaign and hired several highly paid out-of-state consultants, including Spanish and Vietnamese speakers to conduct one-on-one meetings.

“We just stuck to our message during this campaign,” said IAM District W24 Business Representative/Organizer Will Lukens. “The workers wanted some dignity and better treatment from the company. They were tired of the false promises.”

“I am proud of this group of workers who have endured intimidation and union busting tactics by this employer,” said IAM Western Territory General Vice President Gary Allen. “Now we can get down to the business of securing them a good IAM contract.”

IAM District W24 is assisting the workers in electing local leaders and preparing for contract negotiations.