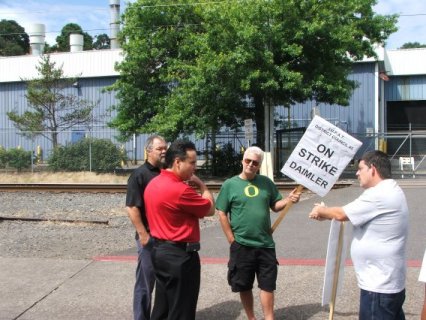 With the strike at the Daimler Trucks North America plant in Portland, OR going on its third week, members of IAM Local Lodge 1005 continue to hold the picket line as talks between the IAM and company representatives resume.

As reported in the Northwest Labor Press on July 2, members of Machinists Lodge 1005 voted down a contract offer from Daimler Trucks North America and went on strike at 12:01 a.m. July 1. One of the main issues for members was the wage and benefits package that was part of the company’s “last, best, and final offer.” Wages have been frozen over the last four years and workers still increased plant productivity by 25 percent. Daimler workers feel that the financial sacrifices they made deserve recognition by the company, whose profit margin has steadily increased over the same period.

“The employees took [the last, best, and final offer] as a slap in the face,” said IAM lead negotiator Joe Kear in an article published by Reuters, adding that the higher medical costs were “wiping out a good portion of the raise.”

“The issue here is less about money and more about dignity on the job,” said IAM Western Territory General Vice President Gary Allen on a visit with members at the picket line. “The time has come for the company to recognize the financial hardships that our members have endured to keep this company profitable. It is time to be reasonable about how that profit is to be shared by all the working people of Daimler.”

For the latest information on the strike at Daimler visit the IAM Local Lodge 1005 website: http://www.iamll1005.org/ and click here and here for photos.