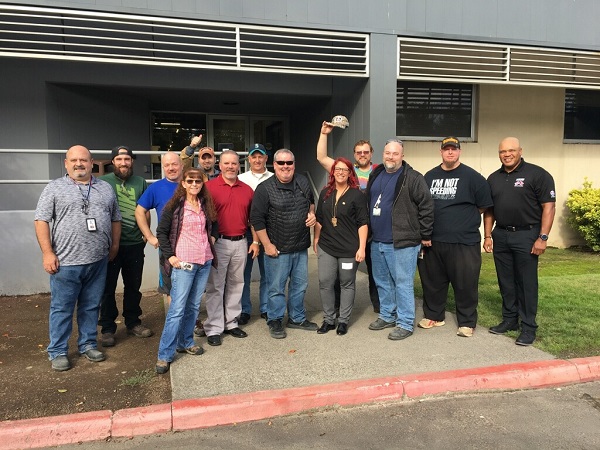 On September 22, nearly 100 workers at Precision Castparts in Portland, OR voted to join the IAM. The company makes heavy-duty metal components for airplanes, generators and other industrial products.

“I want to welcome and congratulate the welders at Precision Castparts for voting to become members of the International Association of Machinists and Aerospace Workers,” said IAM International President Bob Martinez. “And I want to thank IAM Organizing Director Don Barker, lead organizer Billy Anderson, and the rest of the IAM organizing team for their hard work and dedication throughout this campaign. This hard-earned victory is how working people join together to make our economy work for all of us.”

The group of welders voted in favor of joining the IAM following changes implemented after the company was purchased by Warren Buffet’s Berkshire Hathaway Inc. early last year. Bringing more fairness in work rules, a safer environment and better compensation are among the reasons workers chose the IAM.

“I’m tired of the double standards and lack of consistency when it comes to leadership enforcing company policies,” said welder Brett Clevidence.

“Respect. If there is no mutual respect between the worker and his superiors, then the workable atmosphere is gone. No loyalty equals no gratitude,” said welder Tony Casteneda. “I want to see my place of work flourish, and I want to be that example who works with pride and dignity, as my superiors do their job and help me succeed so we can produce a respectable product for the customer”

“The IAM will give me a safer and cleaner environment and crack down on major safety problems,” said welder Fred Collison.

The new members now begin the process of negotiating their first IAM contract.