Organizing As A Team 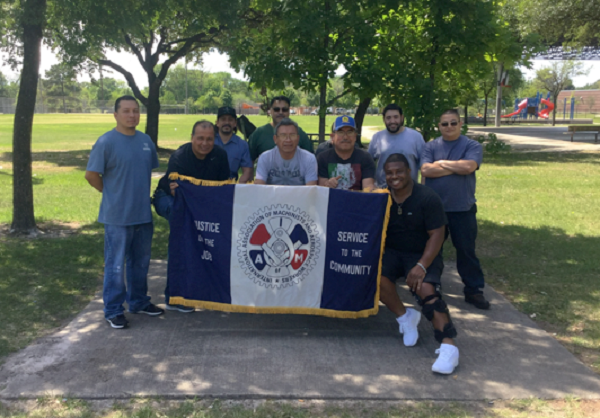 Although you may see an “I” in the word Organize, the sentiment doesn’t match when the IAM is on the job. That’s especially true in the Southern Territory where, at times, organizing can be considered a team sport, with everyone sharing a spot on the starting line. That’s exactly what happened with the workers at WFI International, Inc. in Houston, TX who just voted ‘YES’ to the Machinists Union in 17-7 win.

“Initially, the WFI lead came from the IAM’s Transportation department. But because this was a group of machine shop workers, Transportation General Vice President Sito Pantoja allowed the Southern Territory to run the ball.  In the end, by working together, there is a group of workers in Houston that will now proudly be backed by a great IAM contract. That is the end result everyone involved wanted to see. That’s the only thing that counts when it comes to organizing,” said Southern Territory General Vice President Mark Blondin.

“Organizing is not about which department leads the campaign or who ultimately gets credit, it’s about the IAM working together to better the lives of those who want to join our great union,” said Transportation General Vice President Sito Pantoja. “Most importantly, our joint effort with the Southern Territory will now provide the sisters and brothers at WFI International, Inc. a voice in their future.”

But the team effort didn’t stop there.  Directing Business Representative of District Lodge 37 Byron Williams said he could not have accomplished this vote without the help of his Brothers and Sisters at the Southern Territory office.

“Congratulations goes to everyone involved in bringing this contract home,” said Williams. “We in the South know what a good IAM contract means and what it can do for our members and their families. Working together, we were able to support a group of workers who wanted that for themselves.  This was a home run.”

According to Williams, ST Grand Lodge Representative James Parker and Ramon Garcia were both huge assets. Parker for his years as an experienced organizer and Garcia for his communications skills in both Spanish and English. Both using their knowledge to make the IAM understand exactly what WFI workers needed and wanted.

“This was a special win because they are Machinists by trade,” said Garcia. “And it was very important that we were able to communicate with them, and distribute information, in their native tongue. Being able to cross cultural differences like that is a huge benefit that IAM offers its membership.”

By working as a team, this group of workers is going to have a voice on the job. Safety, seniority and long, overdue wage increases are the main issues that will be addressed in the first contract.

Williams said, “This is their contract, we are just support.  And I am so proud of the workers for voting for the IAM. Now they won’t have to be afraid to speak up at to work, they will have a voice at the table.”