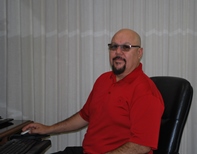 Osorio, an IAM member for over 15 years, comes to the Winpisinger Center with a wealth of experience as an IAM activist, officer and steward in the aerospace sector.

“Our workplaces are changing – and changing rapidly – as is the demographics of the labor force – those we strive organize, service, and represent.  We have an opportunity and obligation to make education more broadly available to membership; Edmundo will help us do that,” said Winpisinger Center Director Chris Wagoner. “With his activist background, practical shop floor experience, and bi-lingual skills, he will be able to make an immediate impact at the Winpisinger Center.”

Osorio has been a long-time member of the Spanish Leadership Working Group at the Winpisinger Center and has been involved in reviewing, translating, developing and delivering the Leadership Programs in Spanish.  He is currently enrolled in the inaugural cohort partnership with SUNY Empire State College pursuing a bachelor’s degree in labor studies.

Osorio is a published author. His first book “Dearly Deported”, published in 2013, is a collection of stories and accounts shared with him by undocumented immigrants who experienced deportation to Mexico. He holds an associate’s degree in electronics engineering technology from ITT Technical Institute in La Mesa, CA.