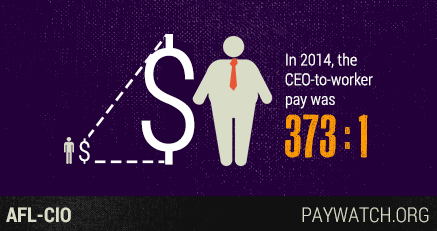 The AFL-CIO has released its latest Executive PayWatch report, and it isn’t pretty for America’s workers.

The pay gap between CEOs and the typical worker widened to a whopping 373-to-1 in 2014. The average production and nonsupervisory worker earned only $36,000, while executives of the Standard & Poor’s 500 Index received, on average, $13.5 million in 2014 – a 16 percent raise from the year before.

“America faces an income inequality crisis because corporate CEOs have taken the raising wages agenda and applied it only to themselves,” said AFL-CIO President Richard Trumka. “Big corporations spend freely on executive perks and powerful lobbyists to strip rights from workers, but when it comes to lifting up wages of workers who make their companies run, they’re nowhere to be found. Too often workers are seen as costs to be cut, rather than assets to be invested in. Americans deserve better from those from those who have earned so much off the backs of working men and women, and we must start by adding transparency to the CEO pay process and requiring companies to disclose their CEO-to-median employee pay ratios.”

The Executive PayWatch is the most comprehensive searchable online database tracking the excessive pay of CEOs of the nation’s largest companies. The website offers visitors the ability to compare their own pay to the pay of top executives, highlights the 100 top-paid CEOs and breaks out CEO pay data by state and by industry. The site also tracks and grades votes cast by 106 of the largest mutual fund families on executive compensation at the public companies they invest in. Mutual funds own more than one-fifth of all shares in U.S. public companies, giving them a great deal of influence in determining executive pay at these companies.

Executive PayWatch also gives you a chance to take action and ask the U.S. Securities and Exchange Commission to require big corporations to disclose their ratio of CEO to median employee pay.