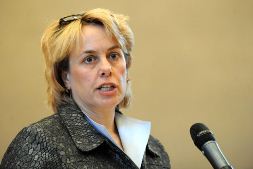 Connecticut AFL-CIO Executive Secretary-Treasurer Lori Pelletier, a member of IAM Local 700, has been elected to the Executive Council of the AFL-CIO, the labor organization announced at its council meetings.

“Lori Pelletier is a tried and true unionist who has served IAM members and Connecticut workers tirelessly for close to three decades,” said IAM International President Tom Buffenbarger. “We’re thrilled that her voice for economic and social justice will reverberate even louder as a member of the AFL-CIO Executive Council.”

Pelletier, the first openly gay woman to lead a state labor federation in the United States, is also the National Co-President of Pride at Work, an AFL-CIO constituency group that supports lesbian, gay, bisexual and transgender workers. She serves on the Board of the Connecticut Women’s Education and Legal Fund, represents the Connecticut AFL-CIO on the executive committee of Citizens for Economic Opportunity and is Vice-Chair of the Universal Health Care Foundation of Connecticut.

Pelletier joined the IAM in 1986 at the Pratt & Whitney plant in Middletown, CT, where she served as Shop Steward, Recording Secretary and Vice President of Local 700.