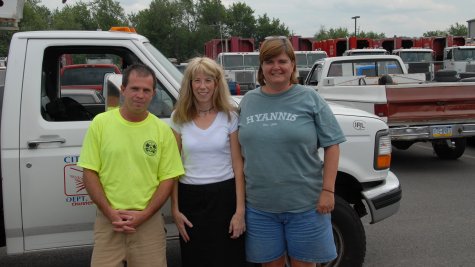 Gene Reed and Kim Kandel of Local 2462 in Scranton, PA, were honored recently by the City of Scranton for their “unselfish act of courage” when their quick thinking saved a woman and her son from their burning home.

Early on the morning of July 16, Reed and Kandel were driving a city lift truck when they noticed flames and smoke billowing from a house in Scranton. On the roof they spotted a woman who had climbed out to escape the flames. Reed instantly drove the truck onto the front yard and hopped into the bucket. Kandel took over the controls and lifted Reed to the second-floor roof where he pulled Kathleen Farley to safety.

Still trapped inside, however, was Farley’s 11-year old son, David Bradshaw. Within seconds, firefighters Paul Schirra and Dan Hanley arrived and rushed David out of the burning house.
Reed and Kandel received a prolonged ovation at the special ceremony honoring them and the firefighters. While appreciative of the recognition, both were still concerned for young David, who suffered second and third degree burns. “It’d be even better if the child turns out alright,” said Reed. “I feel the same way,” added Kandel. “It’s wonderful that we saved [Ms. Farley], but we hope the little boy pulls through.”

“The courageous, quick-thinking of Brother Reed and Sister Kandel is so impressive. They did what we all hope we would do in that type of situation,” said District 1 DBR Danny Chmelko. “Gene and Kim didn’t hesitate for a moment to do what had to be done, regardless of possible personal harm,” added Local 2462 President Nancy Krake.